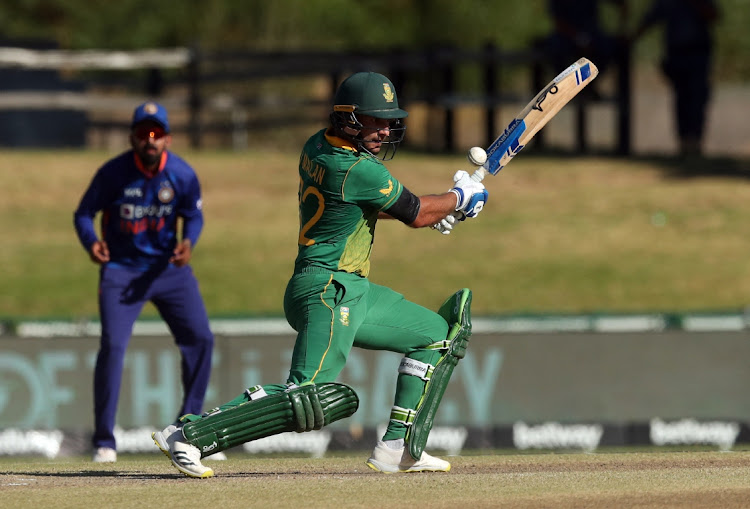 Man of the match Janneman Malan in action in the second ODI in Paarl on Friday.
Image: REUTERS/Sumaya Hisham

The Proteas play for the team and the country, second ODI man of the match Janneman Malan stressed after the team confirmed their series win over India by beating them by seven wickets in Paarl on Friday.

They took an unassailable 2-0 lead in the series with the third ODI at Newlands on Sunday now condemned to the realm of dead rubber.

Malan was asked whether the team was spurred on after news broke that coach Mark Boucher will be facing allegations of misconduct at a disciplinary hearing. He said the team can't have distractions.

“Every time we go out and play we play for the team, everyone in the team and the country as well. That is the kind of responsibility we have as a team as well. Nothing changed on that side,” Malan said.

The team certainly looked unaffected by the behind-the-scenes developments and again asserted their dominance over India. India have not won a match on tour since their triumph in the opening Test at Centurion. They went on to lose the Tests at the Wanderers and Newlands, and the first two ODIs in Paarl.

The batters, in particular, have put SA on the front foot. The fact that No.6 David Miller has faced just two balls in the series is testament to the home team's dominance at the crease.

Though SA won with nine balls to spare, Friday's victory was emphatic.

Malan, who top scored with 91, believes their batters' increasing proficiency against spin was one of the key elements in setting up the ODI series win.

SA continued their domination of India when they took an unassailable 2-0 lead in the ODI series at Boland Park on Friday.
Sport
5 months ago

“We handled their spin better than them facing our spinners,” contended Malan.

“That gave us confidence. Our spinners were nice and tight. We did well as a bowling unit. We kept getting a wicket that kept breaking their momentum.”

He said the Proteas' ability to build partnerships and working hard for every run also helped put distance between the two teams. “The partnerships we built as batters gave us the edge.”

Malan, who has taken to international cricket like a duck to water, missed out on a fourth century in his 13th ODI when he dragged a Jasprit Bumrah delivery onto his stumps.

Still, he upped his average to a staggering 75.8 and now forms a formidable opening partnership with Quinton de Kock.

De Kock looked in imperious touch on a slow wicket. In the end it wasn't the pace of the wicket that was his undoing as he misjudged a full toss and was adjudged lbw for 78.

“Quinton made it easy for me at the start and I was just trying to give him as much of the strike as possible,” Malan said.

“I wanted him to let him go and do his thing. He played a couple of ridiculous shots which is a good sign and he's one of the best batters in the world when he gets going.

“I'm happy for Aiden (Markram) who could show what he can do. A nice and positive mindset, he's got all the talent in the world.”

SA won the toss and elected to bat in the first ODI against India at Boland Park in Paarl.
Sport
5 months ago

SA rode the momentum of their Test series win over India into the ODIs by winning the first one by 31 runs at Boland Park in Paarl on Wednesday.
Sport
5 months ago

The Proteas have withdrawn frontline fast bowler Kagiso Rabada from the squad to take on India in the three-match ODI series starting on Wednesday in ...
Sport
5 months ago
Next Article