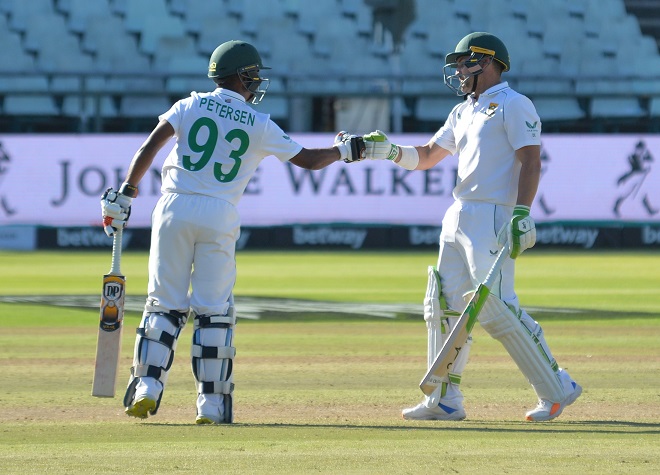 SA pulled off a remarkable, come-from-behind 2-1 series victory over number one Test nation India on Friday with a second consecutive seven wicket-win in the third Test in Cape Town.

It was just the fourth time in 133 years of Test cricket at Newlands that a side has chased more than 200 to win, and displayed the courage and guts of this emerging Proteas side.

TimesLIVE picks out five talking points from the series as SA now prepare to go to New Zealand for two Tests next month.

Elgar is the leader the Proteas need

Dean Elgar said after the win over India at Newlands that he has an “old school mentality with a new school twist” but he has proven in this series that he is the kind of captain SA needs.

He led with the bat with his match-winning 96 not out in the second Test and another important 30 in the second innings in Newlands, but most crucially he was not afraid to ruffle some feathers with underperforming senior players earlier in the series.

Test cricket is tough and you need men of steel at the coalface. Elgar talked about “hard chats” with some senior players after the 113-run loss in the first Test and clearly he is not afraid to address what he sees as a lack of effort or other aspect of underperformance.

He hinted he told them to shape up or ship out. You wonder if Joe Root would take the same approach with his England players. If not, maybe he should.

Petersen is the real deal

The number three position is such a vital one in Test cricket, there to shield against one early wicket becoming two, and all too often in the recent past for SA the person there has been a virtual opener.

Keegan Petersen had to wait a long time for his chance, but his weight of runs in domestic cricket made him the next man in line when the opportunity came.

To finish as the leading run-scorer in the series against India, whose quality seam attack was potent on the helpful SA wickets, is a testimony to his quality and ability to adapt quickly to the international stage.

What was most pleasing was how composed and organised he looked at the wicket, with his cover drive one of the finest sights in the game.

It was a shame he did not get his hundred in the second innings in Cape Town, but he is likely to get many more chances to do so. He is certainly the batting find of the last few years for SA.

SA captain Dean Elgar admits he had to show some tough love to his players, which he believes was behind their turnaround in fortunes as they ...
Sport
4 days ago

Yes, the wickets suited them, and yes, the Indian batters are a jumbled mess in their own heads at times, but the quality on display from the second Test onwards from most of SA’s seam attack was superb.

Kagiso Rabada (20 wickets at an average of 19.05) is one of the best in the world when he is fired up, while Lungi Ngidi (15 at 15.00) bowls with great skill and was by far the most economical of the home quicks, which is important too in building pressure.

Marco Jansen (19 at 16.47) had a dream first series and the transformation from the nervous youngster on the opening morning in Pretoria to the bowler offering left-arm variety that bowled with aggression and guile was incredible to see.

The disappointment was Duanne Olivier, who was well down on pace from the bowler who last played for SA in 2019 and the reasons for that are unclear. It was mentioned before the first Test that his bowling loads were not where the team wanted them to be.

There is still Anrich Nortjé to come back from injury and you would assume it would be a choice between those two.

You have to feel sorry for left-arm spinner Keshav Maharaj, who bowled only 32 overs in the entire series. The wickets were never going to suit him and that is the case for perhaps half the Tests he will play in his career.

Elgar, Petersen and Temba Bavuma all showed their value to the side in the series and should feel secure in their places in the top six.

But Aiden Markram, Rassie van der Dussen and Kyle Verreynne will know they need to do more, though that is perhaps a little harsh on the latter who only had two trips to the crease.

There is no suggestion that any of them should be dropped for the series against New Zealand, where they may find things more to their liking.

But Markram’s problems with leg before wicket when he batted on off stump switched to issues with edging to behind the wicket when he tried to negate that by taking guard on middle stump. The Indians were able to work him out quite easily.

Van der Dussen played a few very important knocks, not least on the final days at the Wanderers and Newlands, but he also only scored 117 runs in six innings, though to be fair one of those was not out.

Verreynne should be given an extended run given his runs in domestic cricket, but there is Ryan Rickelton applying pressure on his position. He can solidify that place in the next series though.

After going 1-0 up with a solid victory in the first Test, few would have imagined India would lose against a far less experienced Proteas, but the chance to win a first-ever series on SA soil is gone.

Captain Virat Kohli pointed to the batting as the issue for the team and he certainly had a point — there were times they seemed to think they could hit their way out of trouble and many certainly did not apply themselves as they might have.

But he must also be a little disappointed with the fourth innings bowling in both the second and third Tests, when his much-vaunted seam attack did not come to the party.

See the pattern? When batting conditions were supposedly tougher, they failed to make it count. It is also fair to say they bowled without luck at times, and dropped important catches.

Kohli can blame the batting, but when it mattered most, the bowlers were found wanting too.

Proteas coach Mark Boucher was a little lost for words when asked to describe the performance of Keegan Petersen in SA's series win over India on ...
Sport
4 days ago

India throw everything at Proteas but stare down the barrel

Keegan Petersen and Rassie van der Dussen rode what India's attack threw at them and batted SA to within touching distance of a series victory by ...
Sport
5 days ago

The inconvenient truth facing the Proteas in the remainder of their Test series against India is that they, in every sense, will be doing the chasing.
Sport
6 days ago
Next Article