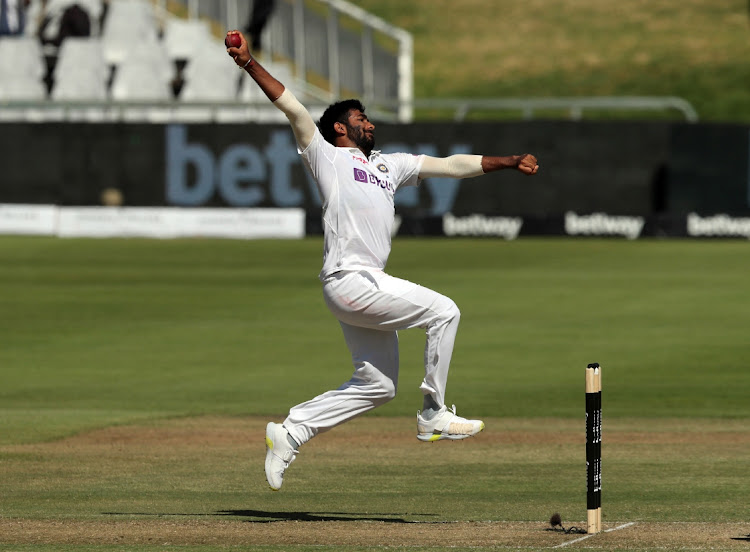 Jasprit Bumrah took 5-42 as India bowled SA out for 210 and then drove home their advantage with the bat as the ended day two of the decisive third and final test on 57/2 in their second innings at Newlands yesterday.

India’s lead is 70, already a sizeable one on a difficult, seaming wicket that is offering plenty of assistance to the bowlers and has seen 22 wickets fall on the opening two days of the contest.

Captain Virat Kohli was not out 14 in an unbeaten partnership of 33 with Cheteshwar Pujara (9) and they will attempt to take the game away from the home team on the third morning as they chase a first ever series win in SA.

Both openers have been dismissed as Mayank Agarwal (7) was caught by Dean Elgar off Kagiso Rabada and KL Rahul (10) was grabbed by Aiden Markram at slip from the bowling of Marco Jansen.

Bumrah gave a masterclass of seam bowling in the South African innings as he got the ball to move both ways and at times leap off the surface.

Keegan Petersen scored a career-best 72 for the home side but played almost a lone hand in the innings with the next highest score Temba Bavuma’s 28.

Petersen, in just his fifth test, showed admirable patience as he batted for 166 balls before becoming the fourth victim for Bumrah when he edged to Pujara at slip.

It is the kind of surface where batsmen never quite feel settled at the crease and the fact that the ball might misbehave at any point is always in their minds.

The series is level at 1-1 after India won the first test in Pretoria by 113 runs, before SA bounced back to claim the second in Johannesburg by seven wickets.

India strike back but Petersen stands tall for Proteas

Keegan Petersen stood tall but India delivered telling blows at the other end on the second day of the deciding Test at Newlands on Wednesday.
Sport
6 days ago

The desire to stand up to and counter the genius of India captain Virat Kohli, helped spur on Kagiso Rabada as he led the way for the SA attack on ...
Sport
6 days ago

Kagiso Rabada continued to grow his legend with another inspiring display as SA ended the first day of the deciding Test against India in a position ...
Sport
1 week ago

India reached tea on the first day of the deciding Test against SA having suffered two more setbacks, but it could have been a lot worse.
Sport
1 week ago
Next Article