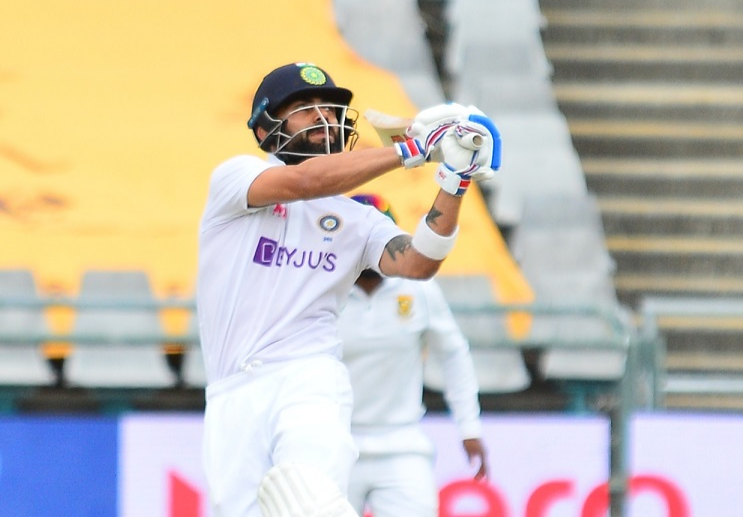 India captain Virat Kohli bats on day one of the third Test against SA at Newlands in Cape Town on January 11 2022.
Image: Grant Pitcher/Gallo Images

India reached tea on the first day of the deciding Test against SA having suffered two more setbacks, but it could have been a lot worse.

They went to tea on 141/4 in their first innings having won the toss with Cheteshwar Pujara (43) and Ajinkya Rahane (9) also making their way back to the pavilion in the middle session.

That placed SA in the pound seat and things could have been even better had India captain Virat Kohli not controversially survived an appeal for caught behind 10 minutes before the break.

Kohli, facing Duanne Olivier, tried to glance a delivery down to fine leg but the ball found its way into the gloves of wicketkeeper Kyle Verreynne.

SA vociferously appealed but it was turned down by umpire Adrian Holdstock. SA decided to take the matter on review.

There appeared to be a very faint sound when the ball passed Kohli's bat before it brushed his thigh pad on its way to the wicketkeeper. TV umpire Allahudien Paleker, however, ruled not out, much to the disappointment of the home team.

Had they captured the wicket of Kohli, SA would have been well and truly in control after the first two sessions. As it stands, the captain looks ominous on 40 not out, while Rishabh Pant is on 12.

Having lost openers KL Rahul (12) and Mayank Agarwal (15) before lunch, India earlier attempted their restoration post the long break. Pujara and Kohli steadied the ship after India were 33/2 and fashioned a third wicket stand with the former very much the senior partner. The normally free-flowing captain scored just 16 when the pair registered their 50-run stand.

Soon after, however, the hosts struck another significant blow with the change of angle from Marco Jansen doing the trick. Bowling around the wicket from the Kelvin End, Jansen got the ball to straighten slightly, which was enough to find the outside edge of Pujara's bat.

Once the ball nestled into the gloves of wicketkeeper Verreynne, Pujara turned in a huff to make his departure. His innings had shown promise and he would have been hugely disappointed at not cashing in on the foundation he had laid.