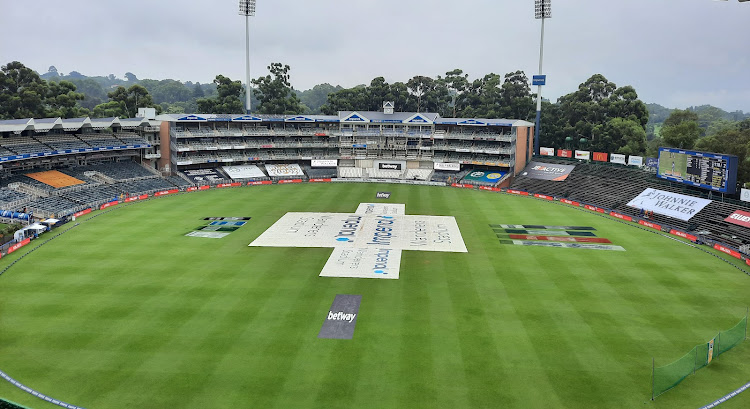 COVERS ON Day Four of the second Test between SA and India delayed by rain.
Image: Mahlatse Mphahlele

The start of day four of the second Test match between SA and India at the Wanderers in Johannesburg has been delayed by a persistent highveld drizzle.

Covers were briefly removed after an inspection by fourth umpire Bongani Jele around 9am but they were quickly put back on as it started to drizzle, forcing the players to remain in the changing rooms.

The match was scheduled to start at 10am and umpires will only give an indication of the inspection when rain has completely stopped.

The match is delicately poised as the Proteas ended day three on 118/2 and still needing a further 122 runs to win and tie this series at 1-1 with the final match at Newlands next week.

For India, they need eight wickets to maintain their unbeaten record at this venue after six matches (three wins and three draws) and to take an unassailable 2-0 lead in the series.

The Proteas will resume with opener Dean Elgar (46) and Rassie van der Dussen (11) following the dismissals of Aiden Markram (31) and Keegan Petersen (28) after tea on Wednesday.

The pitch has proved to be difficult to bat on but SA remain slight favourites because they still have middle-order batsmen Temba Bavuma and Kyle Verreynne in the bank.

Then there is Marco Jansen, Kagiso Rabada, Keshav Maharaj, Duanne Olivier and Lungi Ngidi in the lower order who may be needed to help the team cross the line later in the day.

For the visitors, the responsibility of making early inroads will be on the shoulders of fast bowlers Jasprit Bumrah, Mohammed Shami, Shardul Thakur, Mohammed Siraj and spinner Ravichandran Ashwin.

Fourth innings chases are at their core laden with peril.
Sport
4 months ago

It is anyone’s game in the enthralling second Test between SA and India at the Wanderers in Johannesburg.
Sport
4 months ago

Openers Dean Elgar and Aiden Markram successfully negotiated the remaining 31 minutes of the second session as the Proteas chased the 240 target they ...
Sport
4 months ago
Next Article