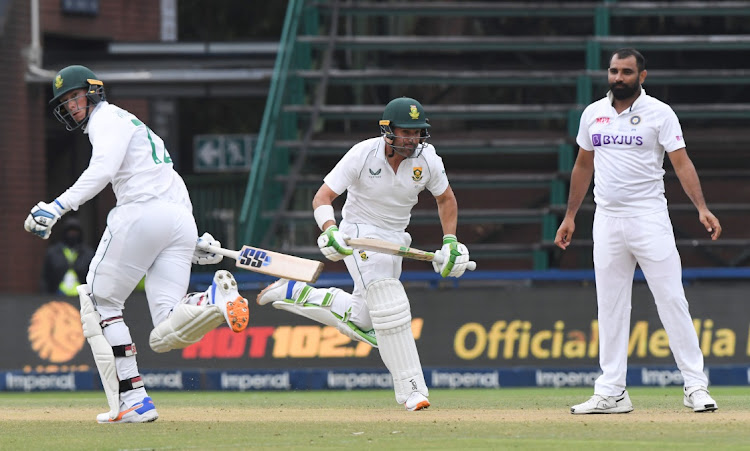 Dean Elgar and Rassie van der Dussen run between the wickets during day four of the Test match between SA and India at the Wanderers on Thursday.
Image: Sydney Seshibedi

Dean Elgar stood tall, with his captain's knock taking SA to a seven-wicket win over India in the second Test at the Wanderers in Johannesburg on Thursday.

Elgar scored an unbeaten 96 off 188 as the Proteas registered their first win over India at the Bullring on day four, which was delayed for about five hours by rain.

India convincingly beat SA by 113 runs in the Boxing Day Test at SuperSport Park in Centurion last week but the Proteas roared back to winning ways to render the final Test at Newlands next week a potentially explosive decider.

India rested their injured batting kingpin and captain Virat Kohli for this match but with the series on the line there is every possibility that they will unleash him in Cape Town.

On a pitch that was difficult to bat on, the Proteas resumed on 118/2, with Elgar on 46 and Rassie van der Dussen on 11 and still needing 122 runs to win.

This was after the dismissals of Aiden Markram (31) and Keegan Petersen (28) after tea on Wednesday as India started the defence of their target impressively.

Led by gritty Elgar, SA successfully negotiated their way to the 240 target they were set by India, who were bowled out for 266 in their second innings, and they will travel to the Mother City with boosted confidence.

Elgar was the cornerstone of the crucial victory, the first loss for India at this venue after six outings, as he contributed significantly to the three notable partnerships of the second innings.

His opening stand with Markram produced 47 runs, his time on the crease with Petersen resulted in 46 runs, and he scored 82 with Van der Dussen and 68 with Temba Bavuma.

The match finally resumed at the Bullring after about five hours of waiting and India, who boasted Jasprit Bumrah, Mohammed Shami, Shardul Thakur, Mohammed Siraj and spinner Ravichandran Ashwin, managed only one wicket. Van der Dussen (40) was caught by Cheteshwar Pujara from the bowling of Shami and Elgar and Bavuma (23) successfully took SA home.

It remains to be seen whether Van der Dussen’s 40 runs will be enough to see him retain his position in Cape Town as he has been lean on runs in recent matches where the top order has battled.

In the second innings, India’s fast bowlers were not at their best as Ravichandran Ashwin, Shardul Thakur and Shami claimed only one wicket apiece, clearly outdone by the Proteas batters.

With the ball in the second innings, most of the destruction for the Proteas was made by Kagiso Rabada, Lungi Ngidi and Marco Jansen who returned with three scalps apiece.

Returning Duanne Olivier claimed the other wicket as they bowled out India for 266 while spinner Keshav Maharaj ended his shift empty-handed on a pitch that offered assistance to the fast bowlers.

Openers Dean Elgar and Aiden Markram successfully negotiated the remaining 31 minutes of the second session as the Proteas chased the 240 target they ...
Sport
4 months ago

Much rests on captain Elgar

Leaving the ball judiciously while not getting bogged down on Thursday, will be crucial to SA's cause as they go in pursuit of a 240 victory target ...
Sport
4 months ago

Fourth innings chases are at their core laden with peril.
Sport
4 months ago
Next Article