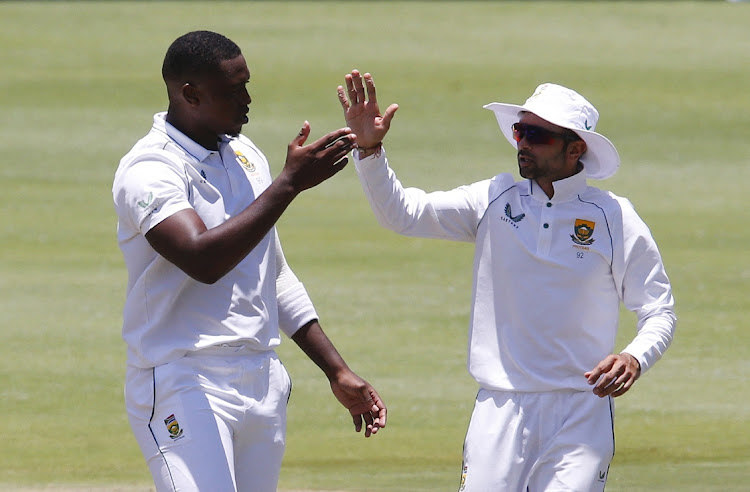 Openers Dean Elgar and Aiden Markram successfully negotiated the remaining 31 minutes of the second session as the Proteas chased the 240 target they have been set by India.

Proteas will resume for what is going to be crucial third and final session of the day with Elgar sitting on 10 and Markram on 24 and still trailing India by 206 more runs.

The visitors ended their second innings on 266 and a substantial lead of 239 which was achieved largely due to the partnership of 111 off 144 between Ajinkya Rahane (58) and Cheteshwar Pujara.

India went to lunch on 188/4 but Marco Jansen and Lungi Ngidi managed to clean up the tail during a spell where South African bowlers struggled with their lines and lengths.

The first to go after lunch was Shardul Thakur having scored 28 runs when he was caught by Keshav Maharaj from the bowling of Jansen who claimed his first wicket of the day.

The wicket seemed to motivate Jansen as he returned a few balls later to account for Mohammed Shami without scoring after he nicked the ball to Kyle Verreynne.

Then, Ngidi wrapped up the Indian tail with successive wickets of Jasprit Bumrah (7), who had an altercation with Jansen, and Mohammed Siraj as they ended on 266 and a substantial lead of 239.

Markram was lucky to made tea as his nicked ball off the bowling of Bumrah did not carry to second slip.

Proteas reach 229 all out as Maharaj and Jansen ensure slender advantage.
Sport
4 months ago

After registering his maiden Test half century against India at the Wanderers on Tuesday, emerging Proteas batter Keegan Petersen thanked his father ...
Sport
4 months ago

‘I believe I have a role to play in SA': ex-Proteas captain AB de Villiers

Former Proteas captain AB de Villiers may be unsure of his immediate future but believes he has a role to play in SA cricket.
Sport
4 months ago
Next Article