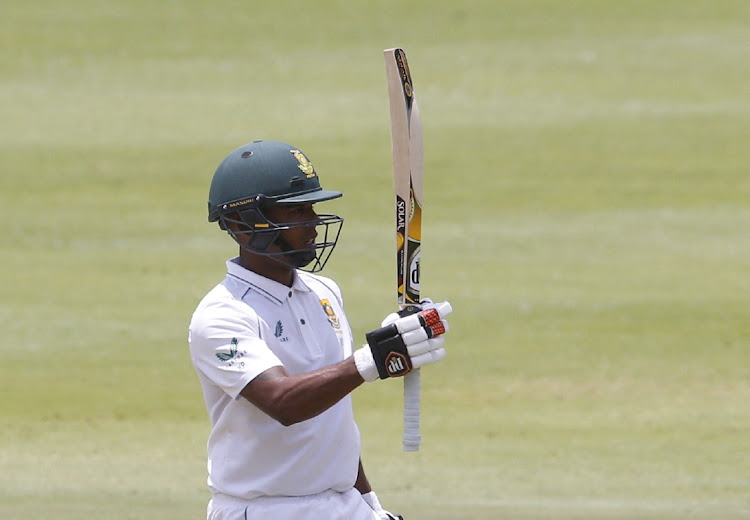 Keegan Petersen registered his maiden Test half-century but SA went to lunch under the pump following the loss of three top order batters before lunch on day two of the second match at the Wanderers.

The Proteas went to lunch sitting dangerously on 102/4 and a deficit of 100 runs following the loss of Dean Elgar (28), Petersen (62) and Rassie van der Dussen (1) to add to Aiden Markram who was a day one casualty.

Petersen, dismissed shortly before lunch, scored a defiant 62 off 118 balls but SA lost their advantage with the wickets of Elgar and Van der Dussen.

SA resumed on 35/1 after the early loss of Markram on Monday and added 67 runs to their overnight score before lunch was called.

Earlier, Elgar took 50 minutes to register his first run of the day when he punched the ball to deep square leg for a boundary from the bowling of spinner Ravichandran Ashwin.

When Elgar registered his first runs of the day, after he faced 32 balls, partner Petersen had already scored 24 on what turned out to be a tough morning for batting.

During their productive time on the crease from the third session of day one on Monday, Petersen and Elgar put together a solid partnership of 74 off 211 balls.

Their stand was finally broken before lunch when Elgar nicked the ball behind and was caught by Rishbh Pant behind the stumps from the bowling of Thakur.

When he was sent back to the pavilion by Thakur, Elgar had added 17runs to his overnight score of 11.

After the dismissal of Elgar, Petersen reached a significant milestone of his short career when he pushed the ball to third man for a boundary and his maiden half-century.

Petersen’s 118 balls came to an end shortly before lunch when he was caught at second slip by Mayank Agarwal after he edged the ball off the bowling of Thakur.

On the stroke of lunch, Takhur struck again when he removed Van der Dussen but television replays showed the South African should not have been given out as the ball did not carry to Pant.

India without Kohli elects to bat

India captain Virat Kohli has been left out of the squad for the second Test against South Africa starting at the Wanderers on Tuesday.
Sport
2 weeks ago

There may be a change of tactics by SA during the New Year’s Test against India at the Wanderers from Monday, where Keegan Petersen may be moved down ...
Sport
2 weeks ago

Marco Jansen's stock as Test cricketer continued to grow, Kagiso Rabada showcased his enduring quality, while Duanne Olivier reminded of his value to ...
News
2 weeks ago
Next Article