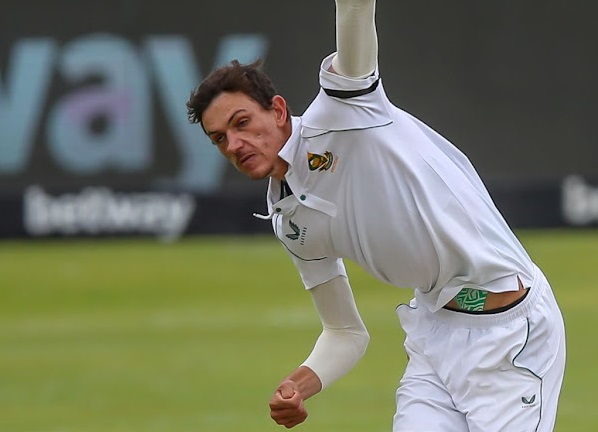 Marco Jansen of SA bowling during day 1 of the 1st Test match against India at SuperSport Park on December 26, 2021 in Centurion, South Africa. Jansen has received a call-up to the SA One-Day International squad.
Image: Gordon Arons/Gallo Images

Tall left-arm seamer Marco Jansen has received his first call-up to the SA One-Day International squad for their three-match home series against India later this month.

The 21-year-old made his Test debut against the touring Indians at Centurion Park last week, where he impressed in the second innings. He is a replacement for fast bowler Anrich Nortjé, who remains sidelined with a hip injury.

Wicketkeeper-batsman Quinton de Kock will be available for the ODI series after his abrupt retirement from Test cricket on Thursday, while all-rounder Dwaine Pretorius earns a recall. The series starts in Paarl on January 19, with a second match at the same venue and the third game in Cape Town on January 23.

There is no need for panic in the SA ranks but their batsmen need to take more responsibility if they are to fight their way into the series against ...
Sport
5 months ago

The sudden decision by Quinton de Kock to retire from Test cricket at the age of 29 has opened up the wicketkeeper position in the longest format for ...
Sport
5 months ago

There may be a change of tactics by SA during the New Year’s Test against India at the Wanderers from Monday, where Keegan Petersen may be moved down ...
Sport
5 months ago
Next Article