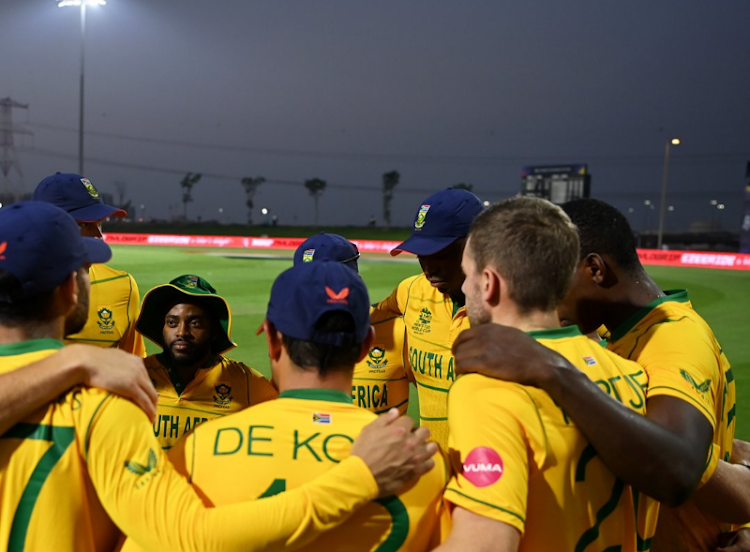 Proteas limited-overs captain Temba Bavuma said there will be discussions around whether members of the team will be obliged to take the knee in future matches.
Image: @OfficialCSA/Twitter

Proteas limited-overs captain Temba Bavuma has said there will be conversations with Test counterpart Dean Elgar and Cricket SA (CSA) on whether all members of the team will be obliged to take the knee for the home summer matches against the Netherlands and India and beyond.

Bavuma interacted with the media virtually after the Proteas returned to SA without fanfare from their unsuccessful T20 World Cup campaign in the United Arab Emirates.

“I know originally what was decided was that the team would take the opportunity to show their gesture in their own particular ways,” said 31-year-old Langa-born Bavuma.

“Things have obviously changed at the World Cup and as a team we have not spoken yet.

“I guess everyone will have to get together and a guy like [Test captain] Dean Elgar will have to be a part of that conversation to see how are we going to do things going forward.

“I would assume all the decisionmakers and role players will be involved in that conversation and decision and it will probably be a situation where it is the team management, the board and probably [director of cricket] Graeme Smith as well, and then a decision will be made in that regard.”

Bavuma said it is important that any gesture made is authentic.

“We can all go out there and raise our fists and go down on our knees, but deep down in your heart if you are not really for the cause and what it stands for, and it does not show in your everyday behaviour, then I guess it brings in the question of the authenticity of it all.

“The important thing going forward is that a decision is going to be a collective one and we want to avoid a situation where things are dictated or instructed to the players.”

An exciting international home summer of cricket is awaiting Bavuma’s team, who host the Netherlands for three ODIs on November 26 and 28 at SuperSport Park in Centurion and on December 1 at the Wanderers in Johannesburg.

The Proteas will follow that with a money-spinning, blockbuster, all-format tour by India, starting with three Tests from December 17.

Bavuma and other Test players will be rested for the Netherlands series where Keshav Maharaj is expected to lead the 16-member team that includes the return to the Proteas fold of Wayne Parnell and Khaya Zondo.

The Proteas were gallant in their World Cup campaign. They lost their opening match and came back strongly with four successive wins, but were unsuccessful in the end as they failed to reach the semifinal stages due to an inferior net run rate.

Bavuma bemoaned what has been the team’s Achilles heel, the batting unit, but said there were positives the Proteas can take from their performances in the UAE.

“One of them is our ability to play in pressure moments, which I think is something we have done exceptionally well in this tournament even though we find ourselves sitting at home and watching on screens,” Bavuma said.

“I think more specifically in terms of the skills, the bowling has been exceptional.

“From a consistency point of view I think we can do a lot more in that regard.

“I think there were massive positives during the tournament and it is important that we grow from what we have been able to learn.”