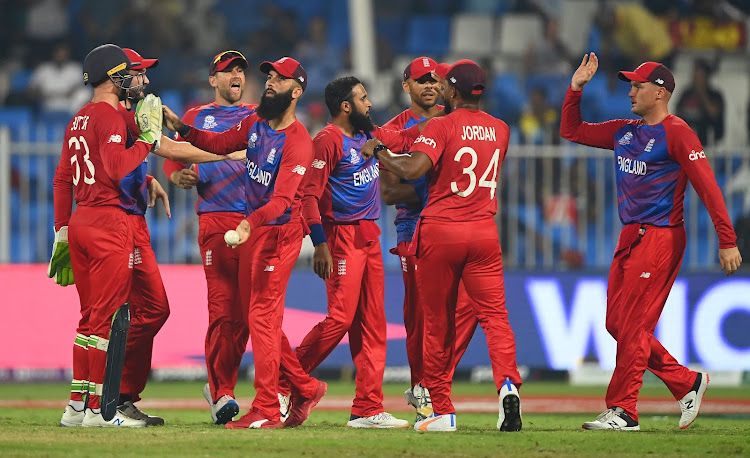 T20 World Cup favourites England effectively sealed a place in the semi-finals after Jos Buttler's incendiary century fashioned a 26-run victory against Sri Lanka in their Group I match on Monday.

Put in to bat, England's batting looked under pressure for the first time in the tournament but Buttler's unbeaten 101 off 67 balls fired them to a strong 163-4.

Sri Lanka were 137 all out in 19 overs, threatening to pull off an upset at one stage, but Eoin Morgan's team went on to notch up their fourth victory in as many matches to consolidate their position as group leaders.

Former champions England are bidding to become the first team to hold the 20-overs and 50-overs World Cups at the same time.

Sri Lanka's spinners dictated terms early in the match to restrict England to 36-3 after the powerplay overs.

Leg-spinner Wanindu Hasaranga, fresh from his hat-trick against South Africa, deceived Jason Roy with a googly to knock back his off-stump.

Kusal Perera spilled an edge from Dawid Malan but it did not matter in the end as Dushmantha Chameera crashed the next ball onto the stumps.

Hasaranga (3-21) returned to trap the scoreless Jonny Bairstow lbw and England laboured to 47-3 at the midway stage of their innings.

Buttler and skipper Eoin Morgan (40) decided to go after the pacers instead and hit Lahiru Kumara for three sixes in the 15th over.

With Buttler going berserk with the bat, England plundered 116 runs in the final 10 overs.

The stumper-batsman brought up his maiden century in T20 Internationals with his sixth six off the final ball of the innings.

Sri Lanka endured a top order wobble of their own when they began their chase.

Leg-spinner Adil Rashid dismissed Charith Asalanka and Perera in successive overs to wreck Sri Lanka but the 2014 champions refused to throw in the towel.

Hasaranga shone with the bat too, top-scoring for his side with a quickfire 34 to boost Sri Lanka's hopes of pulling off an upset.

Liam Livingstone cut short his stay and Buttler threw down the wicket to run out Dasun Shanaka (26) to effectively seal the match in England's favour.