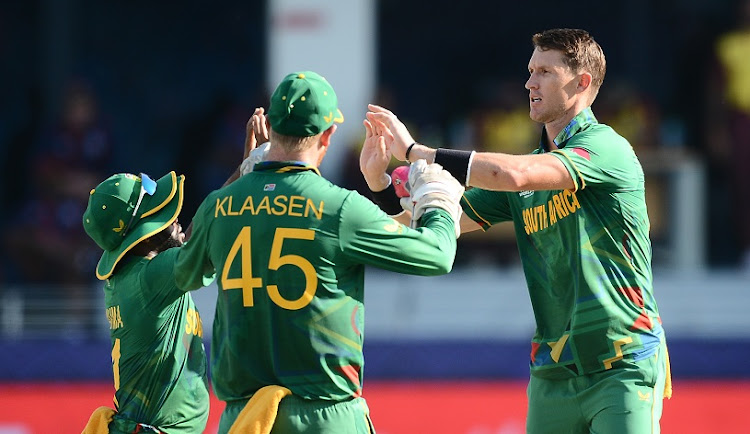 Just when they looked dead and buried in the desert David Miller smashed SA to a nerve jangling T20 World Cup win over Sri Lanka in Sharjah on Saturday.

The four-wicket win keeps alive their prospects in the so called group of death, while Sri Lanka now face long odds to progress to the next phase.

Finding an unlikely foil in the form of Kagiso Rabada (13, off seven balls), Miller (23, off 13) resurrected the SA innings smashing two sixes in the final over to help get the Proteas over the line.

Needing 143 to win SA suffered initially on a low and slow pitch at the hand of a disciplined and cunning Sri Lankan attack.

Wanindu Hasaranga took the third hat trick in the history of the competition to help shackle the SA chase but captain Temba Bavuma showed grit to keep his team in the contest with a run-a-ball 46.

Inevitably, again, much of the focus was on pre match activity. In their last match eyes were fixed on whether all the players would take a knee but this time it largely centred around whether Quinton de Kock would be included in the starting team.

Although the SA batting got the job done in the win over the West Indies, De Kock's craft at the top of the order remains a commodity not easily replaced.

He was duly restored with Heinrich Klaasen missing out and the left hander might have felt a little pressure when he padded up.

Bavuma however won the toss and De Kock had to wait a little longer before he strapped on his batting pads.

On a low, slow pitch the SA reply didn't so much require a chase, as a cool, calculated and methodical riposte. Their innings needed to be punctuated by high notes rather than it be the prevailing currency.

Their reply required patience, alertness to opportunity, and the ruthless punishment of the bad ball.

Dushmantha Chameera bagged the scalps of Reeza Hendricks and De Kock in the fourth over.

Bavuma's urgency in trying to rotate the strike is admirable but he at times invites unnecessary risk. It was helter skelter stuff between him and Van der Dussen and the latter was later perhaps predictably run out.

On a two paced track that was also used the day before stroke making did not come naturally.

SA bowled out Sri Lanka off the last ball of the innings for 142 with Tabraiz Shamsi 3/17 with 13 dot balls and Dwaine Pretorius 3/17 doing the bulk of the damage.

While Shamsi, who has now taken the most international wickets in this format this year, is expected to be in the thick of things, Pretorius has emerged from the shadows with the ball.

The allrounder has been deployed as a death bowler and again he bowled with precision guile as the Sri Lanka stuttered in the closing overs.

The opening overs however was more like a sparring match.

Two boundaries behind the wicket was half of what Kagiso Rabada deserved in his first over.

Sri Lanka were 39/1 at the end of the Power Play but soon they pressed the accelerator. They started loosening SA's grip but Charith Asalanka's needless run out saw the brakes slammed on the Sri Lankan innings. Although Asalanka's attempted second run carried potential peril it was Rabada's sharp return that condemned the batsman.

Halfway through their knock Sri Lanka reached 67/3 with Shamsi starting to stamp his authority. Having not taken a catch off his own bowling in this format he pouched two to further slow down the islanders. He took a third but was greatly aided by Wanindu Hasaranga's intention to dispatch the ball into the next emirate.

If he, as the top ranked bowler in this format is often leaned on heavily in the SA attack,

He notched up his second T20 half century off 46 balls and was eventually dismissed for 70 off 58 balls.