All well with Maxwell ahead of Australia's World Cup campaign 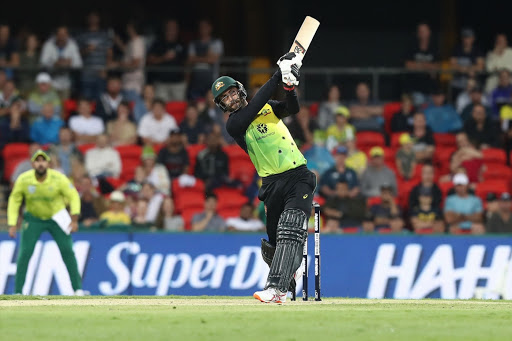 Australia head into the Twenty20 World Cup with question marks over the form and fitness of multiple players but have no such worries about Glenn Maxwell, who is enjoying a sparkling buildup in the Indian Premier League.

Maxwell has been Royal Challengers Bangalore's standout batsman with 447 runs at a lofty strike rate of 146.55, and has caught fire since the IPL's resumption in the United Arab Emirates.

After three consecutive half-centuries, Maxwell was steaming toward a fourth against Sunrisers Hyderabad on Wednesday but had to be content with a 40 after being brilliantly run out by Kane Williamson.

The wicket turned the game for Hyderabad, who claimed a four-run win.

Maxwell's blazing form bodes well for Australia's hopes of a maiden world T20 title and has helped clean the slate after a disappointing 2020 IPL with Punjab Kings.

He was offloaded by Punjab ahead of the players' auction in January, opening a path for Bangalore to swoop for the 32-year-old all-rounder.

Maxwell's $1.89 million price tag raised eyebrows but he began paying it off quickly, scoring 39 in their opening win over defending champions Mumbai Indians and 59 in the next match against Hyderabad.

Few other batters in Australia's T20 squad are scoring runs, with opener David Warner dropped by Hyderabad, captain Aaron Finch recovering from knee surgery and Steve Smith in and out of the Delhi Capitals side.

"He looks to be hitting the ball beautifully, he’s confident at the moment, and his backswing looks really impressive,” Finch said of Maxwell.

"So, the thing I like is he’s taking games deep, and as we know, he’s as destructive as anyone in the world when he’s on.

Maxwell's mercurial talent has been a double-edged sword at times in his career, with captains prone to throw him up and down the order for tactical reasons or just to plug holes.

Yet he tends to perform when sticking firm to a spot in the middle order, as seen in Australia's T20 side over the past 18 months when he has mostly batted at four.

Clarity of his role has helped him get into a similar groove at Bangalore, he said.

"It's something I've probably had in Australia over a long period of time as well which is probably why I've had the success there," Maxwell said this week.

"Coming into RCB they wanted me to do the exact same role so it's been really enjoyable to come into the changeroom and to not have to change too much."