'We back our chances,' says captain Bavuma as Proteas fly out to the World Cup 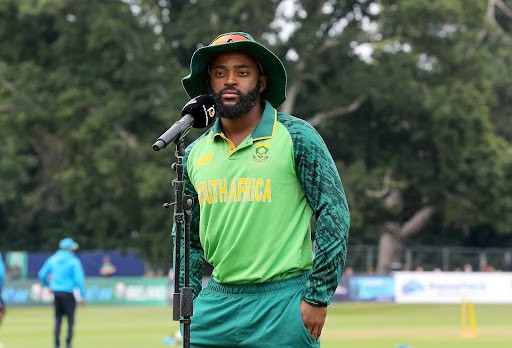 Proteas limited-overs captain Temba Bavuma says the team is in a good space and stands a good chance of success at the ICC Twenty20 Cricket World Cup later this month.

The South Africans are in a tricky group that includes champions West Indies, Australia, and two yet to be determined qualifiers at the tournament to be staged in the United Arab Emirates and Oman from October 17 to November 14.

Bavuma briefed the media on Sunday before the Proteas flew to Dubai where they will set up camp and fine tune for the World Cup.

“It is obviously a tough group that we are in but I don’t think we would have wanted it any differently,” said the 31-year-old from the Langa township outside Cape Town.

While the Proteas are best known for their heartbreaking losses in World Cup tournaments, as happened in the 2011 quarterfinal and the 2015 semis, and two years ago in 2019 when they crashed out in the pool stages, Bavuma believes his team is cut from a different cloth.

SA will start their World Cup campaign against Australia in Abu Dhabi on October 23.

“The teams that we will be coming up against, we have played against them before and have had success against some of them of late and we would be drawing on those good experiences,” said Bavuma.

The Proteas are still riding a wave after their successful limited-overs tour of Sri Lanka last month where they won the three-match T20 series 3-0 to clock their third successive T20 series win away from home.

SA followed a come-from-behind 3-2 series triumph against world champions West Indies in the Caribbean with a 3-0 whitewash over Ireland in Dublin and Belfast in July.

The series success against Sri Lanka in Colombo was their last competitive outing and would have given them a shot in the arm building up to the World Cup.

“I think the biggest thing for us as a team and that we pride ourselves on is to be as well prepared as we can and be tactically astute and make sure that on the day we execute our game plans.”

Bavuma’s team have seemingly put the off-field turmoil that engulfed Cricket SA (CSA) over the past months behind them and they showed that with a clinical display in Sri Lanka.

SA departed for the island nation last month with a dark cloud over the head of embattled coach Mark Boucher, who is at the centre of allegations of racial discrimination that surfaced at the CSA’s transformation hearings.

The national team also left for Sri Lanka without assistant coach Enoch Nkwe, who stepped down last month citing a toxic working environment within the Proteas.

Bavuma said the Proteas are in a good space despite all that has been happening around the team.

“As much as things happened the way they have happened, life still has to go on.

“As a team we have chatted and had conversations that have cleared up certain aspects and I think the team is in a good space.

“You would have seen our performances in Sri Lanka and nothing inhibited us there, and so yeah the team is in a good space.”