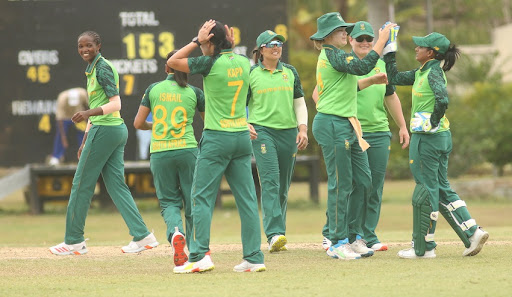 The SA senior women's national cricket team is on the right track ahead of the 50-over World Cup in New Zealand next year.
Image: cricket.co.za

Momentum Proteas women's team head coach Hilton Moreeng was relatively modest for a coach who steered the senior women’s national cricket team to three successive ODI series victories as he gave a report card after they won their first series in the Caribbean.

The Proteas women had a successful eight-match limited-overs tour as they drew the three-match T20 series and crushed the West Indies 4-1 in the five-match ODI series.

“For us it has been a very successful tour and we had challenges of having to acclimatise, and I think we had three days in these conditions to do that, to make sure we got the desired results,” said the 43-year-old Kimberley-born Moreeng.

SA may have made it look easy in unfamiliar flat, slow and low conditions, especially the batters, with Proteas openers Lizelle Lee top scoring with 362 runs in seven matches, while Laura Wolvaardt finished second on the run scorers' list with 232 runs, also from seven matches.

But Moreeng said it was actually quite the opposite.

“And it showed in two of the ODI games we played that if you are not batting as well as you should in these conditions it can be really challenging, especially playing against a team that plays extremely well in their conditions.

“If you told us before leaving SA that this is the result we would have, we would have probably laughed at you, because we know how difficult it is here to achieve a result.

“But overall the unsung heroes were our batters, not taking anything away from our bowlers, considering that they made it very difficult for the hosts to score runs or to get a total that is imposing for us.

“For that we give them the thumbs up and they showed again what a unit they are, all of them firing at the same time.”

It is the team’s third successive ODI series and second in succession on the road, as they gear up for the World Cup in New Zealand in March and April next year.

“Overall we are very happy, the way the bowlers bowled, executing our skills the way we wanted, again gave us an opportunity to have a look at the depth of the squad to see how other players take different roles on the day.

“We will take a lot of positives back home with us.”

Moreeng’s side whitewashed Pakistan 3-0 in January, beat India 4-1 in a five-match series in Lucknow in March for their first series win in India and have now beaten the West Indies in the Caribbean for the first time.

It is a run of form that has had many South Africans believing the Proteas will go into the World Cup as tournament favourites, but Moreeng said the team is not looking too far ahead.

“I don’t know about the favourites but I think for us is to just make sure that the consistency box is ticked.

“I think for us we can tighten up on our batting and make sure that we continue with our form on the field.

“We are very happy with the girls and just want to make sure that we continue with our form.

“There is a lot that we can work on and we would like to have as many games as we can.”