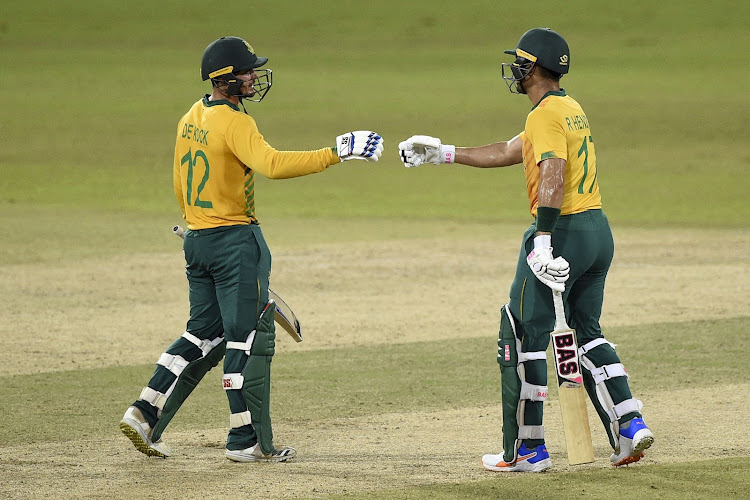 Proteas openers Quinton de Kock and Reeza Hendricks made light work of the chase with an opening partnership of 65 runs.
Image: @ICC/Twitter

The Proteas took an unassailable 2-0 lead after they smashed Sri Lanka by nine wickets to win the second T20 in Colombo on Sunday and seal the three-match series ahead of Tuesday’s third and final match.

After winning by 28 runs in the opening match on Friday, Sri Lanka needed a response to level the series but were let down by a horrible batting display at the R. Premadasa Stadium.

Sri Lanka scored at a poor rate and it was so bad that the only five boundaries they scored belonged to Perera [2] and Rajapaska [3].

Spinners Bjorn Fortuin, Tabraiz Shamsi, Aiden Markram and stand-in skipper Keshav Maharaj shared nine wickets among them as the Proteas made light work of their hosts.

Anrich Nortjé chipped in with a wicket in his two overs while Kagiso Rabada finished wicketless and was bludgeoned all over the park as he leaked 29 runs from just 12 deliveries.

It is Sri Lanka’s record-equalling lowest T20 score and they will aim for an improved display in all three departments in the third and final match at the same venue on Tuesday.

The Proteas strolled to the 104 victory target with 35 balls to spare.

Openers Quinton de Kock and Reeza Hendricks whittled down the target score with an opening partnership worth 65 runs before the former was caught behind for 18 runs off 19 balls.

De Kock, who led the charge with his 10th career T20 half-century, was joined by Markram and the pair scored the winning runs.

Nortje got the breakthrough in the second over after Dinesh Chandimal was caught at mid-on by Maharaj trying to pull.

Markram reduced the hosts to 38/2 after five overs when he caught Bhanuka Rajapaksa [20 runs off 13] off his own bowling.

Sri Lanka scored at a good rate as they put 52 runs in the powerplay for the loss of two wickets.

But when Shamsi struck in his first over in the eighth, to dismiss Dhananjaya de Silva [4 off 6], the hosts found themselves in trouble at 59/3.

Opener Kusal Perera, who top scored for Sri Lanka with 30 runs off 25 balls, looked for partners but found none. Perera watched haplessly as wickets tumbled in front of him.

Shanaka [10 off 8] joined Perera and tried to accelerate, hitting Shamsi for six before the top-ranked T20 bowler responded in the next ball, clean bowling the home captain and leaving the home side struggling on 71/4 after 9.2 overs.

Things went from bad to worse for Sri Lanka when they lost the exciting Perera in the following over, and their chances of posting a respectable total went up in smoke after Markram trapped the elegant left-hander in front.

With Sri Lanka in trouble at 78/5, Fortuin rubbed salt onto the wound as he grabbed his first wicket, causing Wanindu Hasaranga de Silva [4 off 7] to make it 86/6 after 12.5 overs.

With 104 needed from 120 balls in their chase, De Kock, Hendricks and later Markram were hardly troubled.