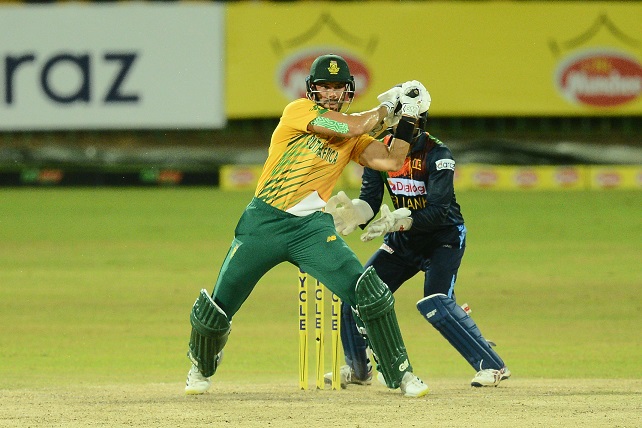 Aiden Markram plays a shot during the 1st T20 International match between the Proteas and Sri Lanka at R.Premadasa Stadium in Colombo, Sri Lanka on September 10 2021.
Image: Isuru Sameera/Gallo Images

Proteas top order batsman Aiden Markram is ready and willing to make the most of his new role batting at number three or four in the T20 side as the team continues to prepare for the World Cup next month.

Markram, a specialist opening batsman, batted at No 4 in the second and third T20s against Ireland in July and at No 3 in the 28-run win over Sri Lanka on Friday.

“It is a new challenge, it is something that obviously I have not done too much of in the past, but it is a challenge I am enjoying,” Markram said.

“It requires you to be street smart on how you approach things and I think the biggest thing I have struggled with batting at a position like that is the fact that your game plan can’t be a fixed one.

“When you are up top, which is what I am used to, your game plan is generally set in stone. Whereas now when you're coming in at three or four that game plan needs to change on the day.

“So, I am trying to become comfortable with that, trying to believe that I have the game to adjust if needs be, but also that we have a bit if experience in guys like David (Miller) and Quinny (Quinton de Kock) who are back with the team.

“It is something that I am getting used to but a challenge that I am slowly but surely starting to enjoy.”

Markram also said that they have been working hard on playing spin.

“It is a tough one, I can speak on behalf of the players that the guys are certainly a bit more confident playing spin nowadays. And that is because of the amount of emphasis we have put on it and the amount of training we have done on it.

“It also helps when spinners in your camp are incredibly good bowlers because we face them day in and day out, and as a batter you want to be facing some of best in the world and we have that luxury at the moment.

“The guys have been putting in a lot of hard work from a spin aspect. It is still a work in progress but I do think we have come a long way with the way we play spin. We have put a lot of focus on it

“I think conditions are different from what they are back home so we have spent a lot of time exploring options that each batter is comfortable with and hitting a lot of balls.”