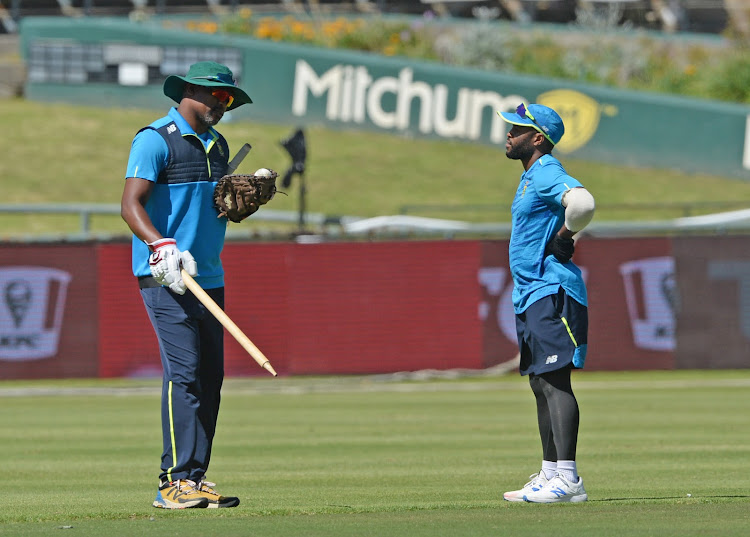 Temba Bavuma chats to Enoch Nkwe during a Proteas training session at Newlands in Cape Town in November 2020. Bavuma says Nkwe's departure is a big loss as he was someone he relied on from a tactical and strategic point of view.
Image: Ryan Wilkisky/BackpagePix

Proteas limited-overs captain Temba Bavuma has said the team did not get an opportunity to say their goodbyes to former assistant coach Enoch Nkwe and hear the reasons behind the decision to quit the national team from the man himself.

But Bavuma has committed to taking the matter up with management when the team returns from their tour of Sri Lanka.

The captain has had to bear the brunt of fielding difficult and sensitive questions from the media concerning the dark cloud hanging over the team management, with head coach Mark Boucher having admitted to racist conduct during his playing days, and his assistant Nkwe quitting the team and citing a toxic working environment in the current Proteas team as the reason.

Bavuma briefed the media in his pre-match captain’s press conference from Colombo on Wednesday and faced as many questions about the Proteas’ readiness for the opening game of the six-match white-ball series against Sri Lanka starting on Thursday, as the dark cloud hanging over the team.

“The reasons to him leaving, to be honest, as a team we have not had an official forum or space where we had the opportunity to hear from Enoch himself as to what his reasons are,” Bavuma revealed.

“A lot has been speculated within the media and I don’t think it would be fair for me to further add to that speculation.

“I would like to hear from him, and I mean if there is merit to his comments and credibility, then as a member of the team, it is something that I will take on board and have a discussion among the team.”

Bavuma said as a captain he would like to have a sit down with Nkwe when the team returns home from Sri Lanka to have a deeper understanding of the contaminated Proteas team environment.

“In saying that, some of the senior players within the team, conversations have been had.

“We have looked at ourselves as a team to see how best we can do things and that is not to say that the culture is an unhealthy one.

“I think every team has areas in which they can improve on and you have to have those conversations to identify those areas.”

Bavuma said it is the responsibility of the current crop of senior players and management within the national team to cultivate a new culture, where everyone feels a genuine sense of belonging.

“I think culture is something that is an ever-growing thing to be honest.

“You know when I look at when I joined the team in 2014/15, there was a certain type of team culture displayed through Protea Fire, and that had a certain meaning behind it and the main custodians and guys who had that responsibility of building that culture are unfortunately not here any more, guys like Faf [du Plessis], JP [Duminy], Dale [Steyn], AB de Villiers.

“And now you have a different set of senior players, who now have that responsibility of building the team culture.

“I think that is still within its early stages and for us it is about using the right words in cultivating that culture.

“So I think it is in that stage, and for me to say whether there is a bad culture, I don’t think it is at that point to be honest.

“What I will say is that it is something that we are still cultivating and hard conversations are happening.

“That is all with a view to us cultivating an environment that allows for the guys to play their best cricket, but most importantly, have that proper sense of belonging.”

Before Thursday's first of three ODI matches, Bavuma insisted that the players are fully focused on preparations for the limited overs series.