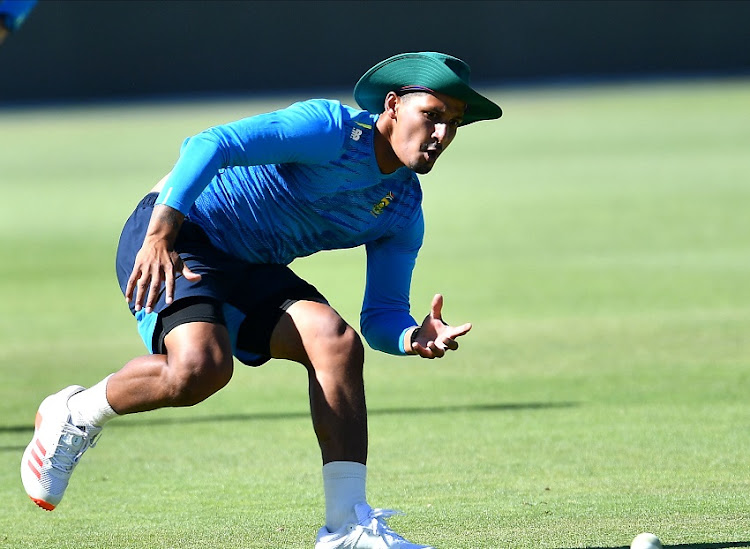 Beuran Hendricks will be looking to add to the eight ODIs he has played for the Proteas.
Image: Ashley Vlotman/Gallo Images

Beuran Hendricks can count himself fortunate that he only needed a few stitches after he was hit almost smack in the face by a shot from hard-hitting Proteas teammate Dwaine Pretorius during the team’s practice session in Colombo at the weekend.

The freak accident happened during the Proteas' first practice session on Friday, but the Lions left-arm seamer did not need to be hospitalised and had a black eye as a reminder of the incident.

It remains to be seen if he will be named in the 11 who will play in the opening ODI of the three-match series against Sri Lanka at the R. Premadasa International Cricket Stadium at 11am SA time on Thursday.

“I finished my [practice] bowling stint in the middle and had a bit of extra time sort of to help out, so I went to the nets and threw a little to Dwaine Pretorius and a couple of other guys,” said Hendricks.

“While I was throwing some guys wanted spin, obviously, just to enhance their game of spin and prepare for the conditions we are going to be in.

“Obviously Dwaine, who is very excited to be here and we know hits the ball quite hard, and I just threw one a little bit too full, a little bit too wide and it popped straight back at me at some speed.”

Hendricks said he tried to get his hands in the way but the ball slipped through his fingers and went straight to his eye.

“I went down and obviously everybody had a little bit of a shock, but it felt OK. I did not have much dizziness or anything like that, and I got tested by the doctors for concussion.

“Luckily the ball did not hit me too hard and I was cleared from concussion, but I had to get these stitches.

“Luckily it happened on the first day of the tour and not while I was in the middle of a game.”

The fast bowler was floored by the incident but said he was able to stand up and walk as soon as the doctor attended to him.

“I checked if my eye was OK. I first checked if I was dizzy or what. The moment the doctor came over, he stood me up and made sure that I could walk and see clearly and that I don’t have a headache.

“I am quite happy to come out sort of unscathed, but I will never forget this tour.”

Hendricks can count himself a lucky man. There has been many incidents in cricket where players were seriously injured and hospitalised after being hit by a ball, while some have lost their lives.

The cricket community and sports in general will never forget November 27, 2014, undoubtedly cricket’s saddest day, after 25-year-old Australian batsman Phillip Hughes passed away after he was felled by a bouncer during an Australian domestic game two days earlier.

Hughes was wearing a helmet but he was unfortunate as the ball struck an unprotected area just below his left ear. He lost consciousness immediately and was placed in an induced coma.

Since then the world cricket governing body has put in place protocols for concussions, which Hendricks has lauded.

“I think it is a massive positive that has been put into the game. The moment I got hit in the head my thinking was to check myself to make sure that I am OK first before I could stand and just think that everything is OK.

“Since the protocols, we as players are much more aware now of what is going on around us, especially when it come to being hit in the head.

“We can’t just be stubborn because we know what could happen from it. So I am happy with the way things went.”

In June, a net bowler was taken to hospital after being hit on the head by a shot from David Warner during Australia's practice session at The Oval.

Embattled Proteas coach Mark Boucher's career was ended by a freak injury when a bail flew off onto his eye during a tour of England in 2012.