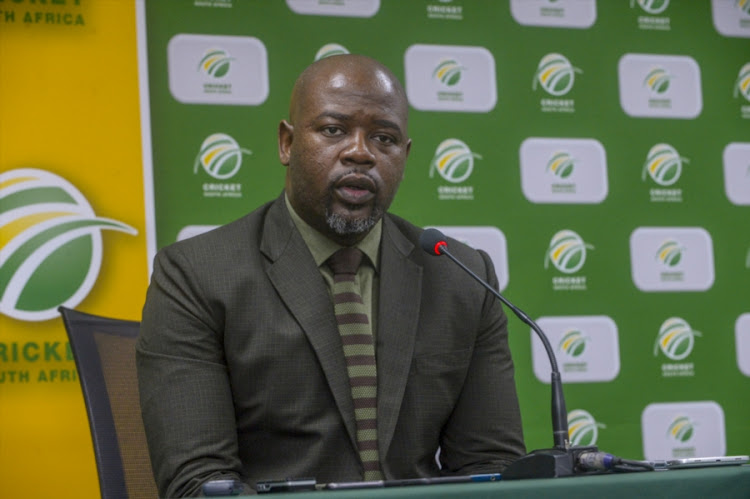 Former Cricket South Africa (CSA) CEO Thabang Moroe has testified that he was persecuted by the organisation‚ which he says allowed the media to “demonise” him‚ alleging the entire process that led to his dismissal last year was informed by bias.

Moroe gave some insights in his case against the organisation‚ which is now sitting at the labour court‚ in his testimony under oath at the CSA Social Justice and Nation-building (SJN) transformation hearings.

Moroe’s testimony left the chairperson of the proceedings‚ Advocate Dumisa Ntsebeza‚ convinced the former CEO was not “dealt with fairly”.

Moroe‚ who was suspended in December 2019 and fired in August last year after appearing before a disciplinary hearing‚ told the inquiry that he did nothing wrong and was target for his unapologetic transformation vision for CSA. He said this led to the media demonising him as the “Jacob Zuma of cricket”‚ who was hell-bent on destroying cricket and would stop at nothing to get his way.

“I will talk about my personal matter with the CSA board where on December 6‚ 2019 I received a call from the then-chairperson Mr Chris Nenzani‚ and he informed me of the board’s decision to suspend me as the CEO pending an investigation that they would conduct into my behaviour‚ and that I would be given an opportunity to come and represent my case at a disciplinary hearing‚” Moroe testified.

“This was in December 2019. I only received my letter of suspension the following year‚ I think end of January or beginning of February 2020.”

Moroe alleged that in this hearing CSA had already transgressed its policies.

“Needless to say that‚ from a CSA process point of view‚ our processes and policies had already been transgressed in this matter.

“But because I did not see myself being at war with the board I just let it go. I had good faith in the board in doing the right thing in the right manner.

“I was obviously still talking to the chairperson‚ Nenzani‚ at the time and he would phone me to find out how I was because I was under serious attack from the media.”

Moroe revealed that his “life was threatened” after his suspension and said that CSA had to locate him in a safehouse.

“Immediately when the announcement of my suspension was made‚ I received phone calls where my life was threatened and CSA then whisked me away from my home to put me in hiding‚” he testified.

“I was even afforded protection and only a handful of people knew where I was. My family did not know where I was.

“Mr Nenzani would call me from time to time to check up on me and would tell me that he knew how the media had vilified me‚ and [said] that the board would come out in public in terms of how I had carried myself.

“So one of the last phone calls I received from Mr Nenzani was on March 20 last year [2020] where he said to me he was calling to check up on me again‚ and he also wanted to tell me how he saw things were playing themselves out.

“He said to me: ‘You know‚ Thabang‚ the media has made it so difficult for us as a board to get to a point whereby we can bring you back as the CEO’.

“I said‚ ‘Well I can see how these matters are being reported on‚ but what do you suggest we do?’

“Mr Nenzani said to me: ‘I suggest that we look at entering conversations where we can part ways with you amicably and we can announce such a decision‚ and we take it from there’.

“He then told me that he had a meeting the very same day and another one the following day and that if I did not receive a call that evening he would call me on March 21‚ being a Saturday‚ to tell me what the board had decided in terms of him proposing that the board break ties amicably with me and move on from a cricket point of view.”

“In fact the next time I would hear from Mr Nenzani was him addressing the media and telling them how I was going to be investigated directly‚ and how now [forensic company] Fundudzi was not going to investigate the entire administration and operations of the organisation.

“It was now solely to focus on me and how‚ if there were any transgressions that were found on my part even legal ramifications would be sought‚ and where criminal charges needed to be laid then that would happen.

“I was surprised to hear all of these out in the public. I thought I was still on good terms with the board.

“Fundudzi was then asked to come and conduct investigations.”

Moroe was dismissed on charges of allegedly repeatedly breaching the Companies Act and failing in his primary functionary understanding needed by any CEO or board member.

A forensic company‚ Fundudzi‚ was appointed three months after Moroe’s suspension to investigate CSA decisions and operations dating back to between 2016 and 2019.

The investigation was completed and delivered in July last year and a month later Moroe was fired after the summary report came out that drew scathing conclusions on his term as CEO.

The report also alleged that the appointment of consultancy firm Tina Nathi Management was irregular.