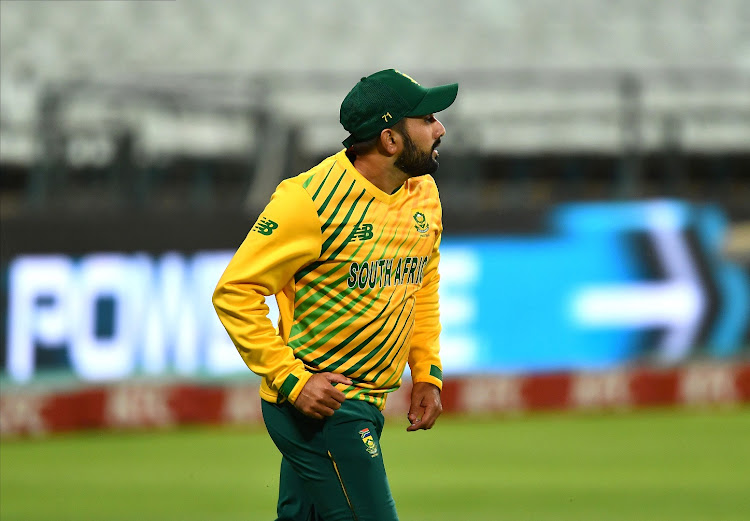 Spinners Tabraiz Shamsi and George Linde shared six wickets between them as the Proteas beat hosts Ireland by 33 runs in Malahide, Dublin, on Monday to take a 1-0 lead in the three-match T20 series.

After Ireland won the toss and Andrew Balbirnie put the tourists in to bat first‚ Aiden Markram top scored with 39 off 30 balls as the Proteas posted 165/7 in their 20 overs.

Openers Quinton de Kock [20 off nine] and captain Temba Bavuma [13 off 13] got the Proteas off to a relatively good start and while Janneman Malan [4 off 5] struggled‚ Markram‚ Rassie van Dussen [25 off 18]‚ David Miller [28 off 21] and George Linde made useful contributions in the middle overs.

But it was Kagiso Rabada’s 19 off just nine balls‚ which included four consecutive fours in the last over‚ that pushed the Proteas score to 165.

The home side had the worst start to their chase.

Spinning all rounder Linde‚ who took two wickets for just 26 runs in his four overs‚ opened the bowling and got the breakthrough with his second delivery to dismiss Paul Stirling [6 off 2].

Stirling’s opening partner Kevin O’Brien was sent packing for a duck after he pushed at a Kagiso Rabada delivery back into the Proteas bowler’s hands in the second over for a caught and bowled.

Ireland skipper Balbirnie [22 off 16] was joined by George Dockrell at the crease but the latter fell after scoring just two runs from six balls as Lungi Ngidi got a wicket with his first delivery to leave the home side tottering on 23/3 in the fourth over.

Ngidi [2-18] struck again with his first delivery of his second over to remove Balbirnie.

Big-hitting Harry Tector top scored for the home side with his 36 off 34 but as soon as he was dismissed by left-arm spinner Shamsi [4-27]‚ the Irish offered little resistance.

Shamsi and Linde cleaned out the Irish middle order as the home side starred a big defeat in their eyes but Barry McCarthy and Josh Little frustrated the South Africans a 38-ball partnership of 44.

With this win‚ the Proteas have now won seven and lost seven in the 14 T20 international matches they have played since January this year.

The action will move to Stormont in Belfast where the second and final T20 matches will be played.

The 6th-ranked Proteas will be aiming for a 3-0 series clean sweep to boost their confidence levels ahead of the Twenty20 Cricket World Cup to be played in the United Arab Emirates and Oman in October and November.

Although the Proteas won‚ they did not do so clinically and will need significant improvement in the next two matches before they tour Sri Lanka‚ where they will play their last three-match T20 series before the World Cup.