Phangiso on his limited time in the World Cup: 'They said Imran Tahir was our number one spinner' 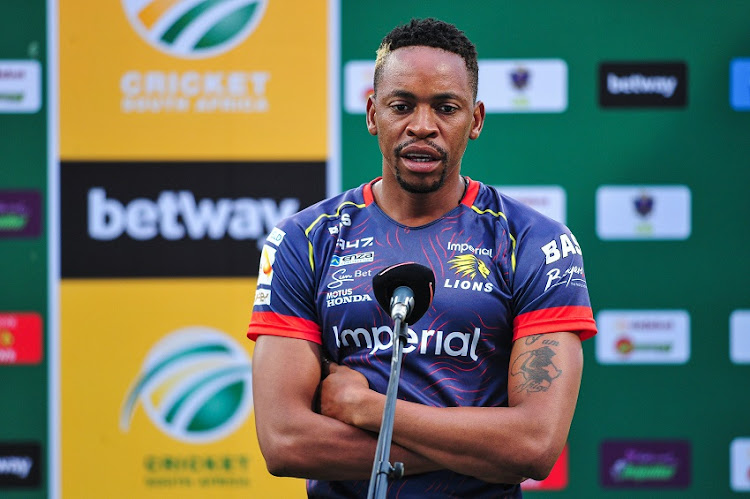 Former Proteas spinner Aaron Phangiso has lifted the lid on the pain he experienced during his time in the national team.

Phangiso was part of the Proteas squad that played in three World Cup tournaments‚ but he only played a couple of matches in the showpiece.

The former cricketeer opened up as he gave testimony at the public hearings at Cricket South Africa’s (CSA) transformation inquiry‚ which was established to investigate racial discrimination within the organisation and to recommend remedial action.

“I went to sub-continent countries [with the Proteas] where spinners dominate the game‚ but 90 percent of the time I was not fielded and that is very heart breaking‚” the Ga-Rankuwa-born cricketer told the inquiry under oath in his testimony of day six of the proceedings.

Phangiso played 21 ODIs and 16 T20s matches for the Proteas and took a combined 46 wickets in both formats.

The Central Gauteng Lions and Northerns have contracted 10 of the 16 Proteas players with national contracts with Cricket South Africa (CSA) in a ...
Sport
9 months ago

“I did not get a chance to play and [during the T20 World Cup] in Bangladesh‚ a sub-continent and spin friendly place. It just make sense that you play your spinners. Your spinners will win you games there.

“When you ask your coaches‚ the answer is always the same‚ wait your turn‚ your turn will come.

“They said Imran Tahir was our number one spinner‚ we back him and you just have to wait your turn‚” said Phangiso.

Russell Domingo was the coach with AB de Villiers serving as captain during the 2014 World Cup. The Proteas crashed out in the semi-finals against India.

“It is heart breaking. You see other teams like Australia‚ who we know produce the best of the best fast bowlers‚ but in that tournament‚ you needed to play two or three spinners.

“I remember a game where actually India only bowled two overs of fast bowling and the rest of the 18 overs were just spin.

“With my team [the Proteas] we always stuck to playing just the one spinner in Tahir. We came back home and obviously family and friends are disappointed.”

Phangiso was not deterred as he continued to work hard and made the 50-over Proteas World Cup squad for the tournament hosted in Australia and New Zealand.

But there too he did not get a chance to play at all.

“The same story happened in the 50-over World Cup in [Australia] and to be honest‚ we played [domestic matches] in SA and I always put in the shifts and my stats were always good going to the World Cup. My performances were good and confidence was good.

“We are there at the World Cup for than a month and a half‚ all alone‚ no game time‚ no nothing. You get the same excuses all the time. Imran is doing well.

“There were times where I could go to the coach and say 'look coach‚ I understand Imran is doing well‚ but if you can look at the games that I play with Imran at the Lions‚ we dominate teams when we bowl in tandem as a combination.' But that was never the case.

Ex-Proteas‚ domestic players and coaches rally behind Ngidi: 'Can there be equal treatment‚ please?'

A group of former Proteas‚ domestic players and coaches have come together in support of paceman Lungi Ngidi after his stance on the Black Lives ...
Sport
1 year ago

“We lost in the semis and I was not given a chance.”

The next Twenty20 World Cup in 2016 in India came and Phangiso was still dominating batsmen on the domestic circuit at the Lions.

Again he was part of the squad. There he only played after putting up a fight. He eventually featured in the last two matches against Sri Lanka and the West Indies when the Proteas had already crashed out of the tournament.

He won the man of the match award in his first World Cup match against Sri Lanka during that tournament.

“Again sub-continent and the conditions will tell you that you need to play spinners. The first game was against England we played only one spinner.

“England played three spinners on that day even a part-timer Joe Root bowled for England on that day.

“If England did that and slotted an extra spinner to bowl an over or two‚ it tells you about the conditions.

“We lost the game. We played the second game and I did not play until I had a very good lengthy chat with the coach and said 'look other teams are playing two or three spinners and we are stuck with seamers Dale Steyn‚ a world class bowler‚ we are stuck with Morne Morkel‚ Chris Morris and all of those guys‚' but the conditions did not allow that.

“The conditions dictated that 'look Phangiso deserved to play and not only because he is black but because he is a good quality spinner.'

“I remember the media back in SA was coming so hard on the coach to say 'why are we not playing Phangiso if other teams are playing spinners'.”

In his two matches in the 2016 World Cup in India‚ he was man of the match against Sri Lanka got a wicket for 18 runs in his allotted four overs.

“That was my experience when it came to the World Cup.

“Even after the three World Cup tournaments‚ we toured India and played five games and only played one game. You look at the India team playing lots of spinners because the conditions dictated who to play and they favoured spinners.

“I can read out my ODI stats to back me up. I tell you at that time‚ when I was in the Proteas team if any bowler in the world had these stats they will still be playing right now and that is a fact.”

Phangiso played 21 ODIs and 16 T20s matches for the Proteas and took a combined 46 wickets in both formats.