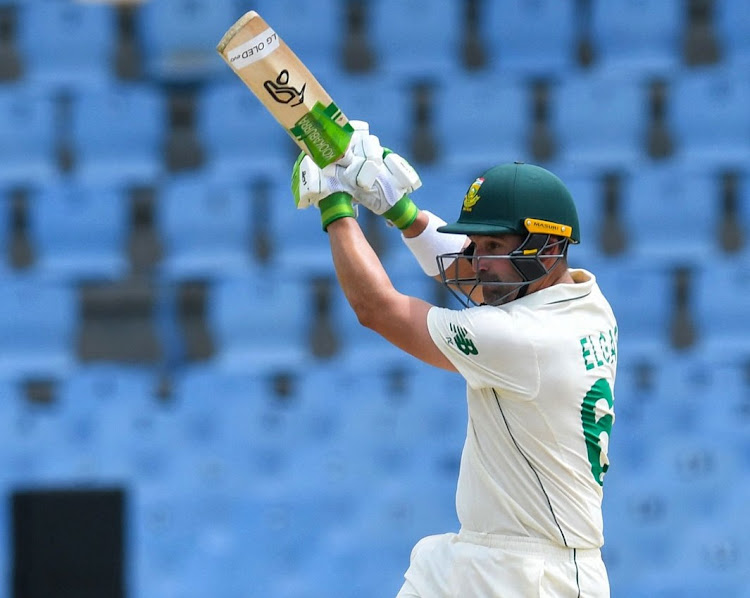 SA’s new Test captain Dean Elgar led from the front with a stoical 77 runs to see his side to 218 for five wickets when bad light stopped play on the first day of the second Test against the West Indies in Saint Lucia on Friday.

Quinton de Kock, who Elgar replaced as Test captain in March, contributed a further 59 runs in a fightback from the tourists after losing three wickets in the opening session at the Daren Sammy Cricket Ground.

De Kock and Wiaan Mulder will resume on Saturday with the West Indies expected to make belated use of the second new ball.

Elgar saw his first three partners depart cheaply to leave SA reeling at 37-3 just before lunch, but anchored two solid partnerships thereafter before being bowled in the last hour of play, having faced 237 balls in a patient innings.

He scored 87 runs with Kyle Verreynne for the fourth wicket as they clawed back matters and then had a 79-run partnership with De Kock.

Captain Dean Elgar is eyeing a clean sweep of the series against the West Indies in St Lucia and wants a massive win in the opening Test to be a ...
Sport
1 year ago

Elgar was eventually bowled by a ball from Kyle Mayers that nipped back and squeezed in between bat and pad.

SA were in early trouble, after a brief rain delay at the start of play, when Aiden Markham went without scoring in the second over of the day.

Then Keegan Petersen scored seven before edging to second slip and Rassie van der Dussen (4) shouldered arms to a ball from Kemar Roach that nipped back and removed his off stump.

Verreynne scored 27 before a brush on leg side delivery from Shannon Gabriel saw him removed on the brink of tea.

De Kock, unshackled from the burden of captaincy, began briskly as he looked to repeat his batting heroics of the first test but then slowed down to reach his 50 in 89 balls.

A total of 82 overs were completed before the umpires took the players off with some 20 minutes left as the light suddenly dimmed under the threat of another cloudburst.

Up to 400 spectators were allowed to watch the Test but had to prove they had been vaccinated against Covid-19 before being admitted free.

SA lead the two-Test series after a comprehensive innings and 63-run victory in last week’s first Test, which was concluded inside three days.

Dean Elgar said he was pleased with the Proteas' performance all-round after winning his first match as Test captain as the South Africans thrashed ...
Sport
1 year ago

Sascoc pushes back after Cricket SA names new board

Sascoc is fighting Cricket South Africa's (CSA) move to a majority independent board by‚ among other things‚ looking for support from the sport’s ...
Sport
1 year ago

Seamer Lungi Ngidi showed all his guile to take five wickets for 19 runs as South Africa skittled West Indies for 97 and took control on the first ...
Sport
1 year ago
Next Article