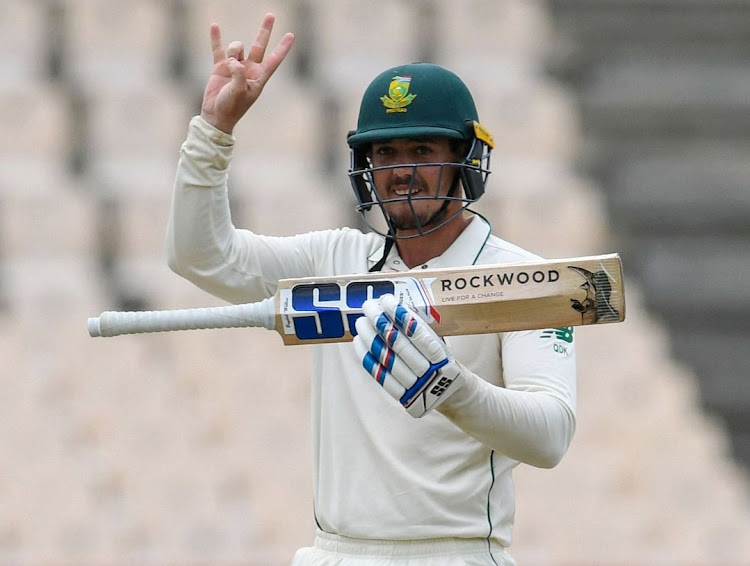 Quinton de Kock scored a career-best 141 not out on day 2 of the first Test against West Indies in Saint Lucia on Friday.
Image: Cricket South Africa/Twitter

SA’s Quinton de Kock rediscovered his batting form with a career-best 141 not out as the tourists seized control of the first Test against a wilting West Indies at the close of play on day two in Saint Lucia on Friday.

The home side reached 82 for four in their second innings at stumps, still 143 behind SA’s first innings score of 322 having been bowled out for a paltry 97 on the opening day.

Roston Chase (21 not out) and Jermaine Blackwood (10 not out) will resume on the third morning on a wicket which is starting to show variable bounce and has provided plenty of seam movement.

The latter is a concussion replacement in the game after Nkrumah Bonner was struck on the helmet by Anrich Nortjé in the first innings.

De Kock was the anchor for SA’s innings as his 141 came from 170 balls and included seven sixes. He has been the one batsman in the match so far to master the difficult pitch.

It was his sixth Test century but first in almost two years. He had averaged a little over 12 in the four tests before this one, so it was a welcome return to form for a player who is a crucial cog in SA’s sometimes brittle batting line-up.

West Indies all-rounder Jason Holder recorded figures of 4-75, but the pick of the home bowlers was 19-year-old debutant Jayden Seales (3-75), who was superb until De Kock got stuck into him late in the innings.

Seales is playing only his second first class game in his young career.

Proteas fast bowler Lungi Ngidi says the team are united despite some of the players opting not to take a knee in respect of the Black Lives Matter ...
Sport
7 months ago

Seamer Lungi Ngidi showed all his guile to take five wickets for 19 runs as South Africa skittled West Indies for 97 and took control on the first ...
Sport
7 months ago
Next Article