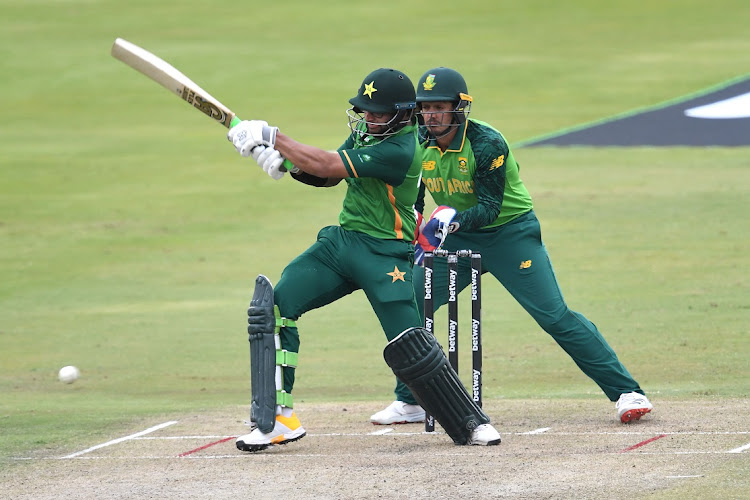 Imam-ul-Haq of Pakistan bats in the first ODI against South Africa at SuperSport Park in Pretoria on April 2 2021.
Image: Lee Warren/Gallo Images

A maiden career century by Rassie van der Dussen was overshadowed by Babar Azam’s commanding ton as Pakistan beat the Proteas by three wickets in the opening one-day international at SuperSport Park in Centurion on Friday.

There was also an impressive career-best 4/51 from Anrich Nortjé that threatened to snatch victory away from the grip of the tourists. But it was not to be after Mohammad Rizwan (40) and Shadab Khan (33) did just about enough after a wobble, their side winning with the final ball of the match.

The result put the visitors 1-0 up in the three-match series, with match two of the contest — the Pink ODI — next up on Sunday.

But the South Africans will be disappointed not to have done better in the capital, having had a few opportunities to do so especially after Van der Dussen’s excellent unbeaten 123 off 134 balls (10 fours, 2 sixes) and 50 (56 balls, 5 fours) from David Miller.

The pair put on 116 for the fifth wicket, rescuing their team from being 55/4 after Pakistan won the toss and opted to bowl first.

Quinton de Kock (20) and Aiden Markram (19) both had starts but then fell along with Temba Bavuma (1), making his captaincy debut, and Heinrich Klaasen (1) leaving the home side in early trouble.

SA's Test opener Aiden Markram has admitted that he did not expect to be recalled to the Proteas’ ODI squad for the series against Pakistan.
Sport
9 months ago

But the Van der Dussen-Miller stand, followed by another 64 runs between the former and Andile Phehlukwayo (29), put the Proteas in the box seat.

Van der Dussen beat his previous high score of 95 scored against Australia at the 2019 World Cup in Manchester for his first ton in any format for his country, while Miller notched up his 15th career half-century.

But there wasn’t enough big hitting at the end to lift the South Africans to a more threatening total as they had to settle for a target of 274.

Pakistan lost Fakhar Zaman (8) early in the chase, but an imposing 177-run second-wicket partnership between skipper Babar and Imam-ul-Haq (70 off 80 balls, 3 fours, 1 six) left their side cruising towards a seemingly routine win.

And with the new batsmen initially struggling, the home side suddenly looked to be in control.

But Rizwan and Shadab added 53 for the next wicket to again leave the Pakistanis cruising.

Both then fell to Phehlukwayo (2/56), again threatening a twist. There was also some indiscipline in the field by the hosts that could have swayed things in a game of fine margins, with the tourists finally getting over the line with the final ball of the game.

Proteas coach Mark Boucher has pleaded with fans to give middle order batsman Temba Bavuma time to find his feet as the new limited overs captain.
Sport
9 months ago

Proteas captain Temba Bavuma believes that South Africa can emulate England and win the next Cricket World Cup in 2023 after crashing out of the ...
Sport
9 months ago
Next Article