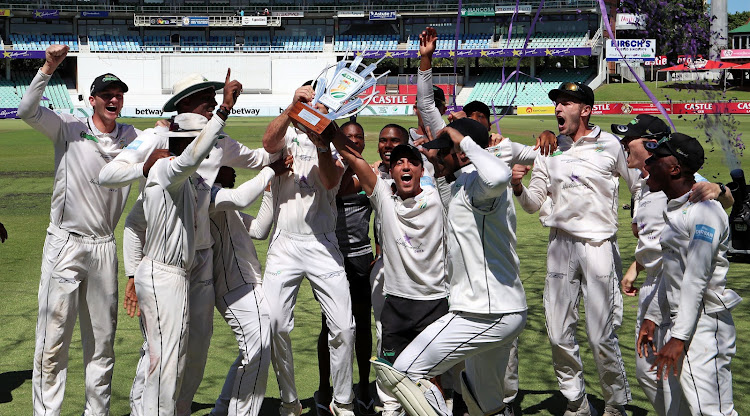 The Hollywoodbet Dolphins cricket players celebrate after beating the Titans in the final of the 4-Day Domestic Series.
Image: Cricket South Africa/Twitter

Senuran Muthusamy claimed four of the remaining six wickets required as the Dolphins drew the curtain on the franchise era by surging to the 4-Day Domestic Series title with an emphatic innings and 76-run victory over the Titans on the final day of the 2020/21 season in Durban on Monday.

The Proteas all-rounder sent down 28.2 overs for a return of six for 79 to help dismiss the visitors for 166 in their follow-on innings‚ taking their match aggregate to 219 following their dismal first-innings 53.

Muthusamy was aided by Player-of-the-Match Prenelan Subrayen after he finished with four for 56 – meaning that 19 of the 20 Titans’ wickets in the match fell to spin: the exception being a run-out in the first innings.

The former ended with a match analysis of nine for 92 and the latter bagged his maiden 10-for with an even better haul of 10 for 80 in 60 immaculate overs.

The result‚ sealed just before lunch on the fifth morning of a match being played over five days at Kingsmead Stadium‚ secured for the hosts a first exclusive first-class title in the franchise era. The last time they won it on their own was in 2001/02 when they were known as KwaZulu-Natal.

They did subsequently share the prize with the Eagles (2004/05) and the Titans (2005/06)‚ but their success in the current campaign was just reward for a term in which they made history by becoming the first franchise to reach all three finals. They were joint winners of the One-Day Cup with the Lions‚ who then beat them in the T20 Challenge final.

But they managed to bounce back from that to secure the most prestigious title on offer in what was the final match before a shift towards a new provincial system from next season.

Imraan Khan’s charges entered the final day in the box seat as the visitors resumed on 92 for four.

Twelve runs into the day and they lost their remaining key batsmen in captain Grant Thomson (2) and Neil Brand (10)‚ both falling to the slow left-arm wizardry of Muthusamy.

The bowler then outfoxed Dayyaan Galiem (10)‚ with Subrayen’s double strike wrapping up his 10-for. The match then ended with Muthusamy dislodging top-scorer Rivaldo Moonsamy (41) rounding off a resounding victory for the hosts.