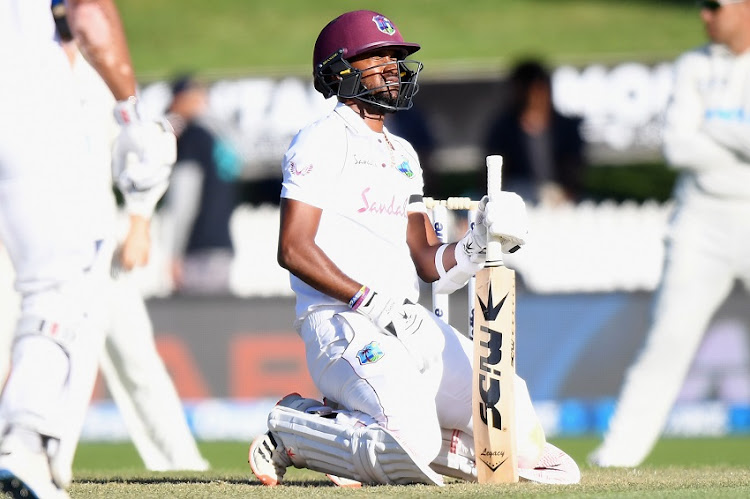 Kraigg Brathwaite of the West Indies reacts after being hit by a ball during day two of the First Test match in the series between New Zealand and the West Indies at Seddon Park on December 04, 2020 in Hamilton, New Zealand.
Image: Kai Schwoerer/Getty Images

Displays of batting resistance and resilience in their recent series have come as a boost to the West Indies team, said captain Kraigg Brathwaite as he hailed the contribution from two new test caps.

Kyle Mayers scored an unbeaten 210 on debut when the West Indies chased down the fifth highest target in test cricket as they scored 395-7 to beat Bangladesh in Chattogram last month and Nkrumah Bonner struck his maiden test 100 this week to ensure a draw in the first test against Sri Lanka in Antigua.

“It shows that the guys have a lot of fight. Coming from Bangladesh, many times we batted over 90 overs,” Brathwaite told a news conference on Friday.

“We batted close to 90 overs again against Sri Lanka and that’s a positive and I think those guys are leading the way – Bonner and Kyle Mayers.

“They have only played in three tests but they are setting the standard high and it’s for all the batsmen to follow – and the team.

“I think these are positive steps for West Indies cricket and once our attitude is right, the sky is the limit.”

Jamaican Bonner has emerged as a late bloomer, making his test debut aged 32. He was a replacement after a spate of withdrawals before the tour of Bangladesh and has grabbed his chance.

Mayers, 28 from Barbados, became only the sixth player in test history to record a double century on debut and followed that with a half century against Sri Lanka when he and Bonner held out on the last day of the first test at the Sir Vivian Richards Stadium.

The second test starts on Monday at the same venue.

“It’s for us to come out again with the same attitude and we just have to keep growing," Brathwaite said. "We won’t always get wins but I’m happy with the fight this team has.”