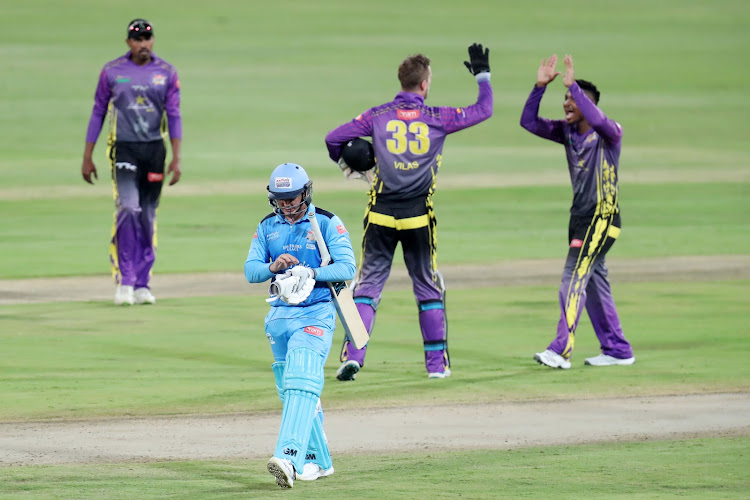 The Dolphins will be lining up in their third final of the season‚ the first time any team has achieved this feat in the franchise era‚ against a team that has been one of the most successful during the same period.
Image: Muzi Ntombela/BackpagePix

Dolphins coach Imraan Khan and his Titans counterpart Mandla Mashimbyi are both determined to end the 2020/21 season with a bang when they battle it out for the 4-Day Domestic Series title in a five-day final starting in Durban from Thursday.

The match at the Kingsmead Stadium draws the curtain on what started out as a hugely uncertain campaign that took place under the Covid-19 cloud. It is also a game that will more significantly bring an end to the franchise era in South Africa with a shift back to an expanded provincial-style format from next term.

The Dolphins will be lining up in their third final of the season‚ the first time any team has achieved this feat in the franchise era‚ against a team that has been one of the most successful during the same period.

The KwaZulu-Natal outfit qualified for the Momentum One-Day Cup final earlier in the year and shared the title with the Lions on account of the weather‚ while they also made the T20 Challenge final where they lost to the same opposition.

But they now enter the first-class decider as the form team after winning back-to-back games and their coach is looking forward to it.

“Preparations have been good and the guys have worked hard‚ we’ve had some great sessions so far this week and the guys are all excited and ready for the final‚” he said.

“Nothing has changed for us‚ we try and keep things the same way they have been and that’s the way it has been.

“I don’t think there’s too much of a difference the way we prepare. The basics remain the same. It’s all about executing on the day and I think if we do that then we’ll be okay.”

Both teams will be without their Proteas for their game as the national team players begin preparations for their upcoming series against Pakistan. It means that Dolphins are robbed off their star man Keshav Maharaj and the Titans will miss their kingpin Aiden Markram.

“You obviously want all your internationals available for these sort of games‚ but it’s an uncontrollable‚” Khan said.

“What it does do is it creates opportunities for other guys and hopefully those that do come in make the most of the opportunity and stand up when it counts most‚ which is in a final.

“Whether they are here or not‚ for us I think it’s been a team effort throughout the season‚ everyone has put up their hand at some point through the campaign. So it’s been a collective and that speaks well of the environment and the culture we have at the moment.”

As for the Titans‚ Khan added: “They are and have always been a competitive outfit. We know all about what they have managed to achieve in the franchise era‚ but we’re not going to look at them too much. We’ll focus on what we need to do and hopefully execute the way we want to.”

Titans boss Mashimbyi‚ meanwhile‚ knows exactly what his team will be up against‚ but he too is trying to keep the emphasis on what they do best.

“The Dolphins have been playing some good cricket of late and I think we have to give them the respect that is due to them‚” he said. “But we don’t want to change anything we’ve been doing.

Mashimbyi acknowledged that it will be a fitting end to the franchise era should his team end it with victory.

“I think it’s important that we pull the curtain down on a high‚” he concluded. “We have been hugely successful as a franchise over the years and we hope the guys that take to the field can close this chapter for us on a high as well.

“So there’s a lot of sentiment in that respect‚ but it matters little if you don’t go onto the field and do what you suppose to.”

A reminder that the final will be broadcast live on SuperSport.

The Dolphins squad is:

The Titans squad is: