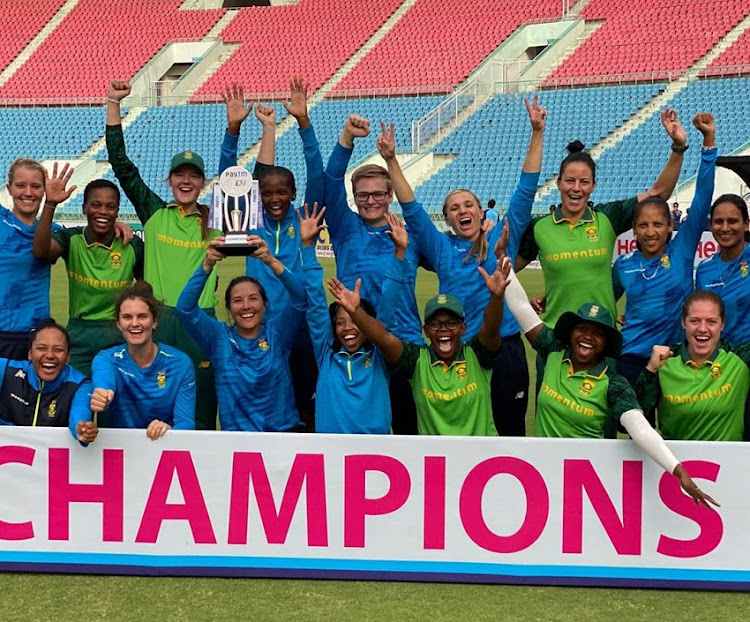 Nadine de Klerk claimed three wickets in a strong bowling display by the Proteas that helped set them on their way to a five-wicket win over India.
Image: TWITTER/CSA

Nadine de Klerk claimed three wickets in a strong bowling display by the Proteas that helped set them on their way to a five-wicket win over India – and with it a 4-1 series scoreline – in the fifth One-Day International at the Ekana Cricket Stadium in Lucknow on Wednesday.

The young all-rounder claimed a career-best three for 35 in 10 overs and was supported excellently by Tumi Sekhukhune (2/26)‚ Nondumiso Shangase (2/43) and Marizanne Kapp (1/25) as the hosts were bowled out for 188 inside 50 overs.

Mignon du Preez then struck 57 (100 balls‚ 4 fours) and Anneke Bosch recorded her maiden career half century with 58 off 70 balls (8 fours) to rescue the tourists from some early trouble to chase down their target with 10 balls to spare.

There was also an important unbeaten 36 off 42 deliveries from Kapp and 19 not out by De Klerk that ensured South Africa walked away with one of their finest bi-lateral series wins.

Coach Hilton Moreeng’s charges did enter the fifth and final match with the knowledge that that they had already won the series‚ but they were still determined to end on a high.

They started out strongly too with Priya Punia‚ Smriti Mandhana (both 18) and Punam Raut (10) taken out relatively early by Kapp‚ Sekhukhune and Shangase respectively to leave the Indians on 53 for three in the 13th over.

A 71-run fourth-wicket partnership between Mithali Raj and Harmanpreet Kaur (30) then followed to put the hosts back on track – and at the same time threatened to alter the momentum.

But the latter was forced to retire hurt with the score on 124‚ opening the door for the Proteas.

And they jumped at the opportunity with seamer De Klerk at the heart of the attack as India fell from 137 for three to 188 all out in 49.3 overs. Skipper Raj was left stranded unbeaten on 79 off 104 balls (8 fours‚ 1 six).

Without the rested Lizelle Lee‚ Sune Luus opened the batting‚ but she was amongst three early wickets to fall‚ leaving the South Africans in trouble.

The captain made 10 and was dismissed after Laura Wolvaardt (0) and Lara Goodall (1) leaving the score on 27 for three in the 11th over.

Du Preez and the rookie Bosch fought back‚ however‚ as they put on 96 for the fourth wicket to put their side back on track. The former went on to record her 17th ODI 50 and the latter her first.

After both fell in quick succession‚ Kapp and De Klerk finished the job with an unbroken 58-run stand that took their side to a penultimate-over win.