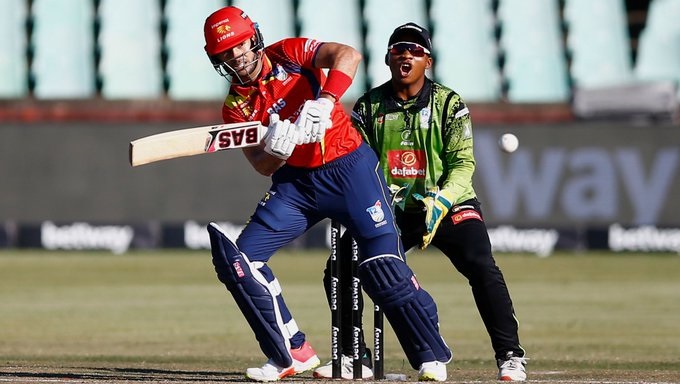 The Lions will take on the Dolphins in the CSA T20 Challenge on Sunday afternoon.
Image: TWITTER/CSA

The Lions will take on the Dolphins in the CSA T20 Challenge on Sunday afternoon at Kingsmead in Durban.

The Lions secured their place in the final with a seven wickets win over the Warriors during their play-off match on Saturday with Temba Bavuma top scoring with an unbeaten 48.

Warriors captain Sinethemba Qeshile won the toss and chose to bat and they reached 141/6 with Wihan Lubbe and Tristan Stubbs top scoring with 52 and 37 respectively.

On a slow surface that proved difficult to bat on, the Lions reached the 142 target with five balls to spare after Wiaan Mulder hammered a maximum with the first ball of the last over.

The Lions ended the powerplay on 45/0 with openers Reeza Hendricks and Ryan Rickelton on 21 and 19 respectively.

After laying the foundation, Hendricks (32) and Rickelton (23) departed in quick succession from the bowling of Jon-Jon Smuts and Mthiwekhaya Nabe respectively. Then, experienced Proteas middle order batsmen Temba Bavuma and Rassie van der Dussen went about the rebuilding process with a defiant stand of 61 off 49.

Their partnership was broken when Nabe removed Van Der Dussen (17) but Bavuma and Mulder ensured that the Lions successfully reach their target of 143/3.

In their batting, the Warriors started with the first wicket partnership of 71 off 53 balls between Smuts and Wihan Lubbe as they frustrated the Lions bowlers.

They Warriors were 50/0 at the end of the first powerplay with Lubbe having made a contribution of 42 and Smuts on 7.

Their partnership was broken by Aaron Phangiso when he bowled Smuts for 23 and the wicket proved to be the start of a collapse as Sinethemba Qeshile, Lubbe and Lesiba Ngoepe followed.

Qeshile was trapped in front by Wiaan Mulder for one run, Lubbe was caught from the bowling of Sisanda Magala and Ngoepe was removed by Beuran Hendricks.

With the wickets of Lubbe, Magala and Ngoepe in quick succession, the Warriors lost the plot as they moved from 71/1 in the ninth over to 95.4 after 16 overs.

The Warriors recovered with a partnership between Tristan Stubbs and Ayabulela Gqamane that produced 45 off 30.