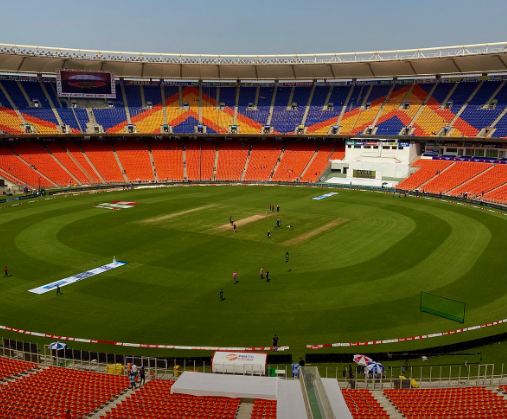 The match is being played at the world's largest cricket stadium, which can hold 110,000 spectators.
Image: England Cricket/Twitter

A much-changed England opted to bat after captain Joe Root won the toss in the day-night third test against India in Ahmedabad on Wednesday.

The tourists made four changes for the match, bringing in the batting duo of Zak Crawley and Jonny Bairstow and quick bowlers James Anderson and Jofra Archer.

Rory Burns, Dan Lawrence and Olly Stone were dropped while Moeen Ali has been rested ahead of the white-ball leg of the series.

"We want to make use of this wicket," Root said at the toss.

"Hopefully we can make a big first-innings score like the first test match and drive it from there."

"We'd have batted first as well. It looks like a pitch where batting first, you can put some runs on the board," home captain Virat Kohli said.

"Having said that, we expect the pitch to assist the bowlers straightaway."

For India, seamer Ishant Sharma will be playing his 100th test at the world's largest cricket stadium, which can hold 110,000 spectators.