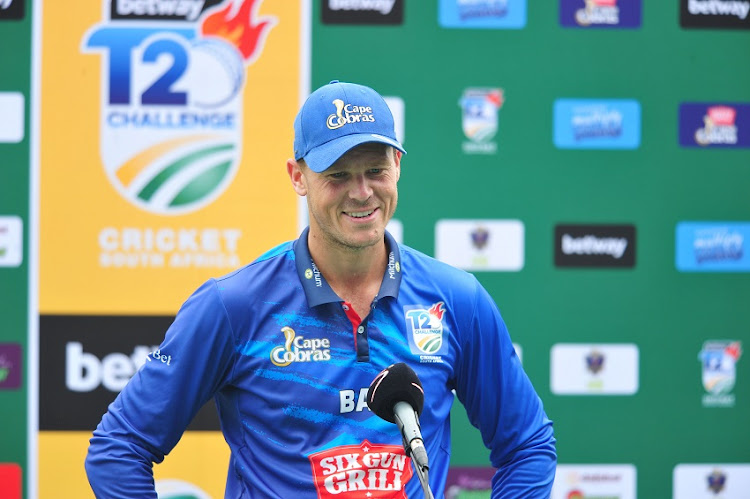 George Linde delivered one of the performances of the T20 Challenge to just about keep the Cape Cobras alive with a 24-run victory over the Warriors at Kingsmead Stadium in Durban on Tuesday.

The Proteas all-rounder first plundered an unbeaten 48 off just 20 balls (6 fours‚ 2 sixes) to help his team amass an excellent 181 for five - the highest score of the 2020/21 tournament thus far - with Zubayr Hamza continuing his return to form with 57 off 45 balls (6 fours).

Linde then claimed a fine four for 25 in four overs as the opposition were restricted to 157 all out in 19.2 overs.

Despite sealing a first win‚ the Cobras are bound to be disappointed after failing to claim a bonus point that would have improved their dwindling play-off prospects.

For that to happen they needed to bowl out the Warriors for 144 or less and they should have done it too after reducing them to 75 for seven in the chase.

Slow left-armer Linde was at the heart of that early onslaught by the Cobras' bowlers‚ removing Jon-Jon Smuts (20)‚ Wihan Lubbe (7)‚ Ayabulela Gqamane (2) and Sinethemba Qeshile (13)‚ while Imraan Manack (2/23) also landed two early blows that saw the Eastern Cape outfit collapse in a heap.

Their poor start meant they only had three wickets standing after 10.1 overs‚ before fast bowlers Marco Jansen (47) and Anrich Nortje (25) added some respectability to the scoreline with a franchise record 67-run eighth-wicket partnership.

Their performance was key to denying the Cobras the bonus point‚ although they at least secured a first win of the campaign against their winless opponents.

Earlier it was Hamza who set Ashwell Prince's side up a big score‚ with his second consecutive half-century and third of his career.

He put on 46 with Kyle Verreynne (26) for the second wicket and a further 71 with Christiaan Jonker (33) for the next wicket‚ before the final flourish as provided by Linde in what turned out to be a strong win.