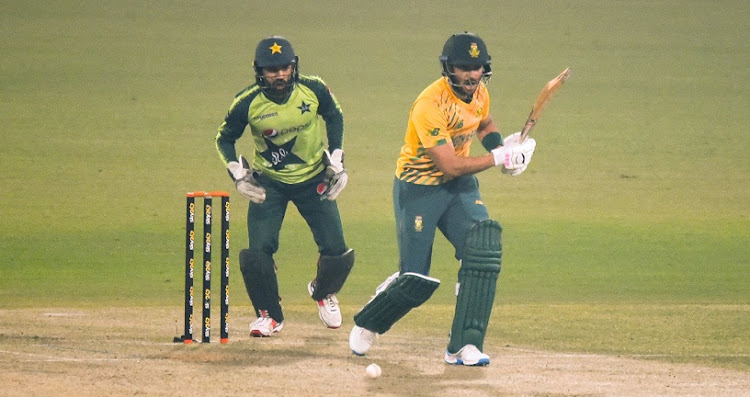 The Proteas comprehensively beat Pakistan by six wickets on Saturday at the Gaddafi Stadium in Lahore.
Image: twitter/csa

Finally, South Africa have something to be cheerful about in Pakistan.

The Proteas comprehensively beat Pakistan by six wickets on Saturday at the Gaddafi Stadium in Lahore to level the series at 1-1 and render the remaining match on Sunday an anticipated decider.

The star of the show for Proteas was Dwaine Pretorius who returned with career best figures of 5/17 following the scalps of Babar Azam, Iftikhar Ahmed, Mohammad Rizwan, Khushdil Shah and Mohammad Nawaz.

His impressive bowling figures also turned out to be best for South Africa in T20 cricket as he bettered the record of 5/19 that was held by Ryan McLaren.

Proteas captain Heinrich Klaasen won the toss and elected to field and they managed to restrict Pakistan to 144/7 largely due to outstanding fielding and good bowling and they reacted with 145/4.

South Africa’s chase got off on a wrong footing as they lost Janneman Malan (4) and Jon-Jon Smuts (7) inside three overs to the bowling of Shaheen Afridi (2/18).

Pite van Biljon (42) and Reeza Hendricks (42) started the rebuilding process with a partnership of 77 as they stood their ground in the middle of the overs to frustrate twin spinners Usman Qadir and Nawaz (1/27).

Qadir and Nawaz finally managed to disrupt South Africa’s chase with the wickets of Hendricks and Van Biljon but unbeaten Klaasen (17) and David Miller (17) guided the Proteas home with 22 balls to spare.

Andile Phehlukwayo and Tabraiz Shamsi were the other contributors with the ball with the wickets of Rizwan and Hussain Talat.

For the hosts, Rizwan was the pick of their batters with 51 and in the process he became the first Pakistani opener to score three successive half centuries in T20s.