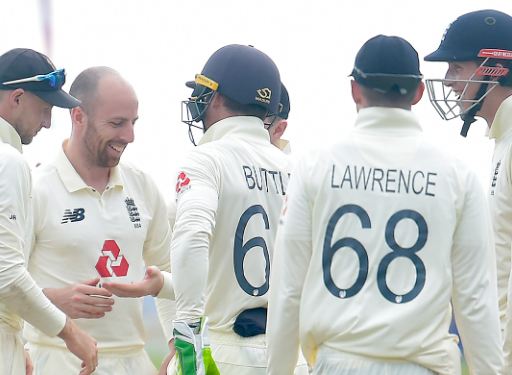 England are looking good to take the lead in the four-match Test series.
Image: England Cricket/Twitter

The 38-year-old picked up three wickets in the final day's morning session to reduce India to 144-6.

With India chasing a record 420-run victory target, captain Virat Kohli was batting on 45 at the break, with Ravichandran Ashwin on two. The hosts must bat two more sessions if they are to secure a draw.

The ball spun and bounced to hit the shoulder of Cheteshwar Pujara's bat en route to Ben Stokes in slip. Pujara, whose dour batting could have helped India bat out the final day and secure a draw, made 15.

Fellow overnight batsman Shubman Gill shrugged off the setback and played his natural game, using his feet well against the spinners.

Gill took a single off Leach to bring up his third fifty in his fourth test but a maiden test century continued to elude the opener.

Anderson claimed two wickets in four balls, the 38-year-old breaching Gill's defence to dismiss him for 50, which included seven boundaries and a six off Dom Bess.

Ajinkya Rahane survived a strong lbw appeal but it did not matter as Anderson's next delivery sent his off-stump cartwheeling.

Bess removed Washington Sundar caught behind for nought as England marched towards a 1-0 lead in the four-test series.