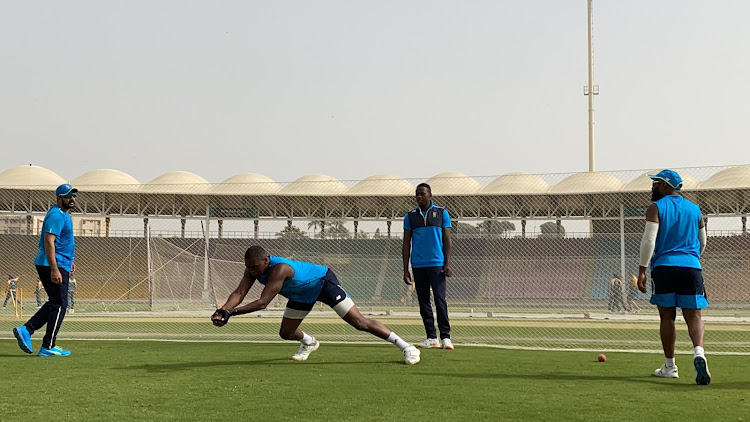 The Proteas players during a training session at the National Stadium in Karachi, Pakistan, on January 25 2021 ahead of the opening test.
Image: Cricket South Africa/Twitter

Proteas coach Mark Boucher expects a turning surface in Karachi and will deploy more than one spinner for the opening test against Pakistan that starts on Tuesday.

The South Africans will be playing on Pakistan soil for the first time since 2017 in the eagerly anticipated two-Test match series in Karachi and Rawalpindi.

“We will definitely play more than one spinner and we have different options in the squad‚” Boucher told reporters during a virtual press conference from Karachi on Monday.

“You will see on Tuesday [when the announcement is released]‚” said Boucher when asked about the composition of his team for the opening test.

The Proteas face Pakistan looking to make it two series wins in succession after sweeping Sri Lanka 2-0 at home.

Boucher said his team will turn up with a mindset to win the two tests.

The former wicketkeeper said the team travelled to Pakistan thinking that reverse swing will play a key role.

Boucher added it was that clear when they inspected the pitch it was prepared for the slower bowlers.

“We sort of came here thinking that the reverse swing is going to play a big role‚” he said.

“We believe that we got different options within our squad. I do think that‚ which is a nice thing as well‚ we’ve got the mindset that we are not scared to go out there and try something different to what’s happened in the past.

“We can see very clearly by the selection of their squad and the conditions in front of us that they are going with a spin mindset.”

Premier test spinner Keshav Maharaj will play a leading role against Pakistan on what is expected to be a slow and turning surface in Karachi.

With Boucher having already confirmed he will play more than one spinner‚ it will be a toss-up between Tabrais Shamzi and George Linde to partner Maharaj in attack.

“I think the conditions look like they are preparing for spin‚ so if you see a lot spin in our set up then that is the way we feel we going to get wickets along with containing and being able to control the run rate.

“The bottom line is that whoever you select they have got to go out there and do the job.”

Boucher said he had a clean bill of health in the team and a full squad to select from‚ but also cautioned that anything can happen overnight in the sub-continent.

“Yes‚ at this stage‚” said Boucher‚ when asked if all of his troops are available for selection.

“My knowledge of the sub-continent is that things happen overnight with stomach bugs and all that sort of stuff.

“There have been one or two guys who have struggled to get the food down a little bit‚ waking up in the morning with a couple of issues‚ but nothing major. Hopefully we will select from a full squad.”

The second and final test will be played in Rawalpindi from February 4‚ followed by a three-match Twenty20 series in Lahore from February 11 to 14.