Rousing welcome for India's Rahane on return from Australia 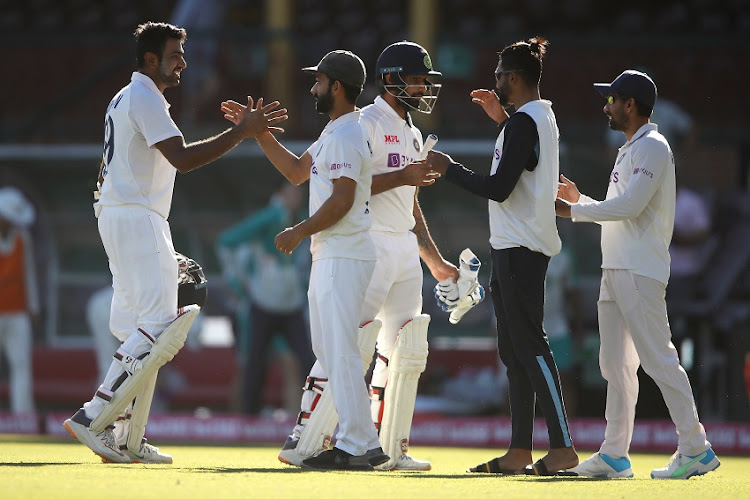 Ravichandran Ashwin, Ajinkya Rahane, Hanuma Vihari and Mohammed Siraj of India celebrate securing a draw during day five of the Third Test match in the series between Australia and India at Sydney Cricket Ground on January 11, 2021 in Sydney, Australia.
Image: Mark Kolbe/Getty Images

India's stand-in captain Ajinkya Rahane returned home to a red carpet welcome in Mumbai on Thursday, having led a severely depleted side to a famous test series win in Australia.

India's regular captain and main batsman Virat Kohli had flown home to attend the birth of his daughter after the opening defeat in Adelaide where the touring side were bundled out for 36 - their lowest innings score in test cricket.

Under Rahane, India levelled the series in Melbourne and secured a nerve-wracking draw in Sydney before triumphing in the decider in Brisbane with a second-string side to retain the Border-Gavaskar trophy.

Cricket-mad India reacted with shock and disbelief at the team's capitulation in Adelaide, with fans thronging to social media platforms to vent their anger at the performance of their favourite sporting side.

But the mood in the country has since been transformed.

Rahane, accompanied by coach Ravi Shastri and other team mates, were congratulated by local cricket administrators on their arrival in Mumbai.

A viral video on social media showed Rahane, 33, being showered with flower petals as he walked along a red carpet amid the beating of drums and loud cheers to enter his housing society with his daughter in his arms.

India wicketkeeper Rishabh Pant also received a hero's welcome in Delhi after being adjudged man-of-the-match in Adelaide and finishing as the highest scorer for the team despite being ignored for the first test.

"It feels amazing when you compare me with MS Dhoni," Pant, 23, told reporters outside Delhi airport. "But I want to make my own name in Indian cricket. It's not good to compare a legend with some youngster."