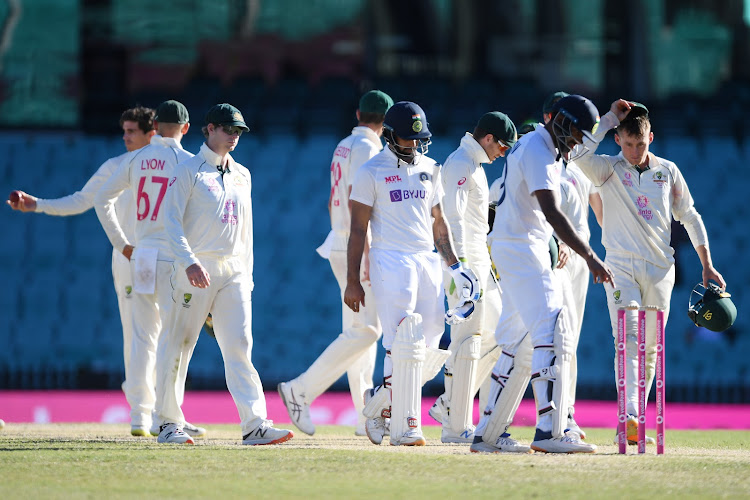 Australian players and India's Ravichandran Ashwin and Hanuma Vihari leave the field after a draw in the third test match between Australia and India at the SCG, Sydney, January 11, 2021.
Image: AAP Image/Dean Lewins via REUTERS

A battered and bruised India team batted resiliently through the final day to snatch a remarkable draw in the third test against Australia on Monday, leaving an engrossing series tied at 1-1 heading into the final match in Brisbane.

A hobbling Hanuma Vihari combined with Ravichandran Ashwin to defy the Australia attack in a partnership over the last three hours of the match and keep alive India's hopes of a second successive series triumph Down Under.

The sixth-wicket stand was worth only 62 runs but immeasurably more in terms of morale for a squad that has endured quarantine, alleged racial abuse from fans and a catalogue of injuries.

Australia's frontline bowlers, who skittled the tourists for 36 in the first test, threw everything they had at the Indian batsmen on a day five wicket that did not deteriorate as much as they had hoped.

India finished on 334 for five, 73 runs short of the victory target of 407 that Australia had handed them after declaring on 312-6 at tea on Sunday.

Earlier, a brilliant 97 from Rishabh Pant and a typically obdurate 77 from Cheteshwar Pujara had given India a glimmer of hope that they might just be able to chase down the imposing target.

Pant, who was a serious injury doubt on Saturday after taking a nasty blow to his elbow, slugged 12 fours and three sixes to take the game to the Australians.

The pair had put on 148 for the fourth wicket before Pant was caught at backward point three runs shy of his century to give off-spinner Nathan Lyon his second wicket of the day.

It was huge relief to the home side, who must have had flashbacks to Ben Stokes's innings of 135 not out at Headingley in the 2019 Ashes that enabled England to snatch victory from the jaws of defeat.

Pujara was the chalk to Pant's cheese, eking out his runs from 205 deliveries over 285 minutes before Josh Hazlewood finally got something out of the second new ball to penetrate his defence and shatter his wickets.

Once they departed, however, a draw was clearly the only target.

Vihari, clearly hampered having pulled up clutching his hamstring after running for a single before tea, scored at a rate that made Pujara look like a limited overs slogger.

His 23 runs came from 161 deliveries, while Ashwin was barely more expansive with 39 from 128 balls.

At one stage, 41 deliveries passed without a run being scored.

Ashwin came out to bat ahead of Ravindra Jadeja, who dislocated his left thumb in the first innings to add to India's long injury list.

The tourists have agreed to travel to Brisbane this week to play the fourth test, Cricket Australia chief executive Nick Hockley said on Monday, ending a week of uncertainty around the match.