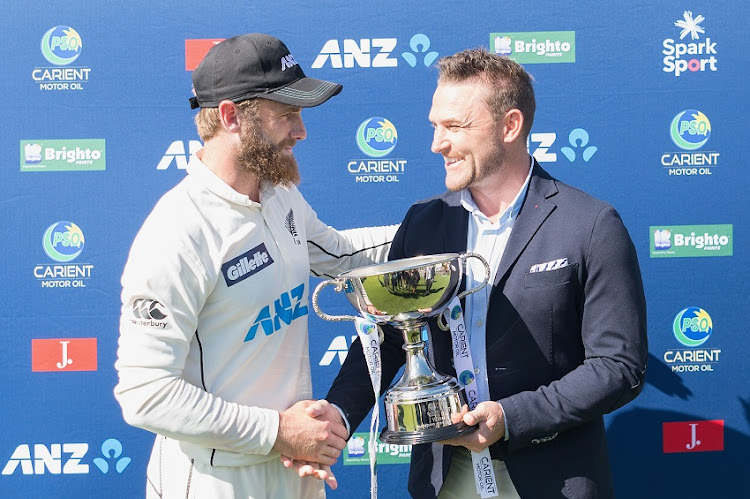 Captain Kane Williamson of New Zealand (L) receives the trophy from former Blackcaps captain Brendon McCullum after the series win on day four of the Second Test match in the series between New Zealand and Pakistan at Hagley Oval on January 06, 2021 in Christchurch, New Zealand.
Image: Kai Schwoerer/Getty Images

A play-to-win culture and dominance at home have propelled New Zealand to the top of the official test cricket rankings for the first time after a crushing win over Pakistan, helped in no small part by having the world's best batsman.

With just 4.9 million people, fewer than Mumbai, Sydney or London, the feat confirmed New Zealand's steady rise across all forms of cricket, having also reached the finals of the last two ODI World Cups.

Their new status is the culmination of a process which had started under former captain Brendon McCullum, said Williamson, who dominated with the bat against Pakistan to confirm his No. 1 status.

"Obviously under Brendon the drastic changes in terms of the culture started things off to a large extent," Williamson said after Wednesday's victory in Christchurch, referring to the team's more aggressive approach to the game.

"There's been a lot of hard work over a lot of matches and trainings," he added.

With the rankings spread over a number of seasons, New Zealand's rise has been helped by its dominance on home soil, where it is unbeaten since being bested by South Africa in March 2017.

The Black Caps now have the highest winning percentage among test teams since then, after playing eight of their last 11 series at home and winning each of them, including twice against England.

Williamson, meanwhile, has led from the front, ending 2020 as the No. 1 world batsman and scoring his fourth double century against Pakistan.

His team are now also in contention for one of two berths in June's inaugural World Test Championship (WTC) final at Lord's.

With a slightly different scoring system, Australia lead the WTC table with 76.7 percentage points, followed by India on 72.2% and New Zealand on 70%.