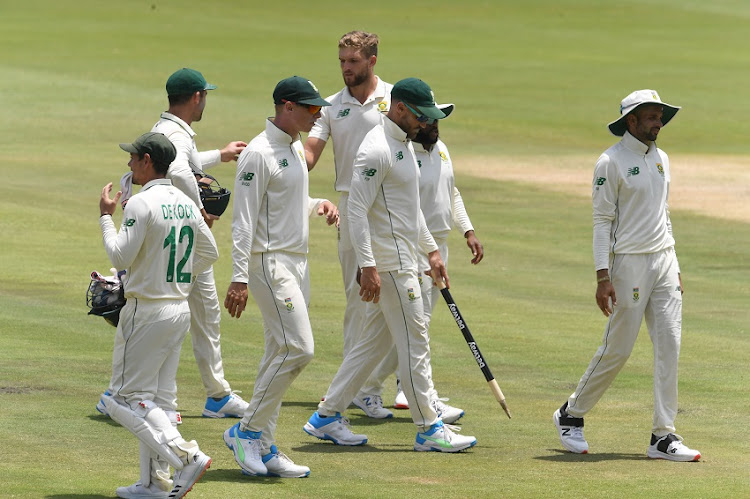 South Africa have completed a resounding innings and 45-run Boxing Day Test victory over Sri Lanka with a day-and-half to spare at SuperSport Park to take a 1-0 lead in this two-match series.

Sri Lanka‚ who struggled due to numerous injuries to key players during the four days‚ were bowled out for 180 in their second innings shortly after lunch on Tuesday to put them out of their misery.

The Proteas will go to the New Year’s Test at the Wanderers next week looking to complete a whitewash that will earn them much-needed World Test Championship points.

Sri Lanka captain Dimuth Karunaratne won the toss and they reached 396 but South Africa replied with a mammoth score of 621 with former captain Faf du Plessis unfortunately left stranded on 199.

The top scorers for Sri Lanka in the first innings were Dinesh Chandimal‚ Dhananjaya de Silva and Dasun Shanaka with scores of 85‚ 79 and 66 as they manage to get the better of the Proteas bowlers.

For SA‚ young guns Lutho Sipamla and Wiaan Mulder impressed in the first innings as they returned with four and three scalps each and were supported by Lungi Ngidi and Anrich Nortje with one apiece‚ while spinner Keshav Maharaj was empty-handed.

When SA replied with the bat‚ they piled on 621 but former captain Du Plessis was unfortunately caught on 199 by Karunaratne from the bowling of Wanindu Hasaranga to deny him his maiden double ton.

Other big contributors to the South African scoreboard were Dean Elgar with 95‚ Maharaj with 73 and Temba Bavuma‚ who bizarrely walked off the field without his bat touching the ball‚ on 71.

In their second innings‚ which they started with a deficit of 225 runs‚ Sri Lanka lost Karunaratne and Kusal Mendis on Monday afternoon and wickets continued to fall the following day.

Damage on Tuesday was started by Mulder who claimed the early wickets of Chandimal and Niroshan Dickwella while Kusal Perera was the victim of the speed of Nortje.

Sipamla joined the party by removing Shanaka having scored six runs when was caught by Quinton de Kock. Vishwa Fernando was run out by a combination of Mulder and Maharaj on the stroke of lunch.

Shortly after lunch‚ Hasaranga and Rajitha were cleaned out by Sipamla and Nortje and injured Dhananjaya de Silva did not bat as SA completed a convincing win.