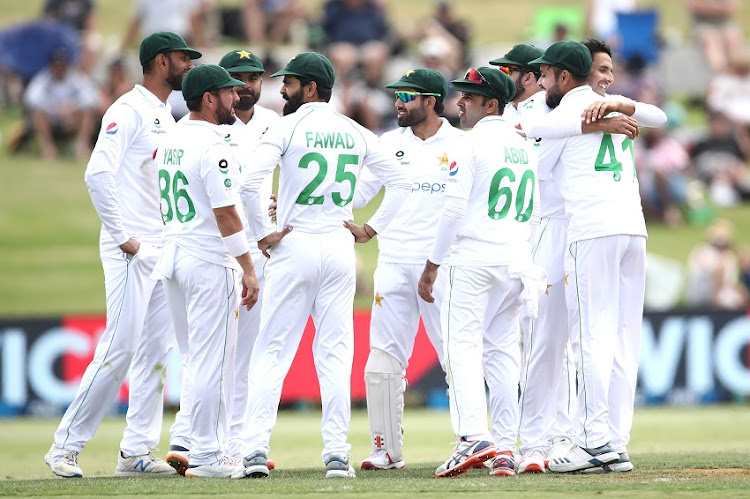 Pakistan celebrate the wicket of Kyle Jamieson of New Zealand during day two of the First Test match in the series between New Zealand and Pakistan at Bay Oval on December 27, 2020 in Tauranga, New Zealand.
Image: Phil Walter/Getty Images

Stand-in skipper Ajinkya Rahane stepped out of Virat Kohli's shadow with an inspiring century on Sunday as India's batsmen banished their horror 36 in Adelaide to take control of the second test against a profligate Australia on day two.

Rahane, left to rally India after Kohli's departure in the wake of the Adelaide humiliation, stamped his authority with an unbeaten 104 at the Melbourne Cricket Ground, driving the tourists to 277 for five before rain brought stumps early.

They have a lead of 82 runs in reply to Australia's first innings 195.

Rahane was reprieved on 73 when dropped by Steve Smith in the slips, and again on 104 when Travis Head coughed up a diving chance on the final ball of the day, but it was a captain's knock of the highest quality by the soft-spoken 32-year-old.

He had pulled India from early peril on a muggy, overcast day and with Ravindra Jadeja (40 not out) built a 104-run partnership that spanned the final session.

Standing firm against a belligerent pace attack when the second new ball arrived, Rahane cut paceman Pat Cummins to backward point for four to bring up his 11th test century.

He raised his bat in an understated celebration as Indian fans in the terraces roared.

It capped a stunning turnaround from the farce at Adelaide Oval, where he ran out his captain Kohli in the first innings and was then out for a duck as India slumped to their lowest ever test innings total.

None of his team mates made double figures in that innings, but at the MCG Rahane found willing support in a rejigged lineup with Jadeja, debutant opener Shubman Gill (45) and recalled wicketkeeper Rishabh Pant (29) making telling contributions.

Tim Paine's Australia were left to rue a poor day in the field, having let Rahane and India off the hook throughout.

Pace spearhead Mitchell Starc will be tearing his hair out having coaxed a nick from Rahane that Smith grassed in the slips after the second new ball arrived after tea.

Starc also sent down the last delivery that pinged off Rahane's glove and which Head looked to have caught safely before it popped out from his hands as he lay on the turf.

Rahane strode off with Jadeja a survivor as a cold front swept over the ground. Australia trudged off fuming, with work to do on day three to prevent India from batting them out of the test.