Faf and Temba steady ship and put Proteas in command 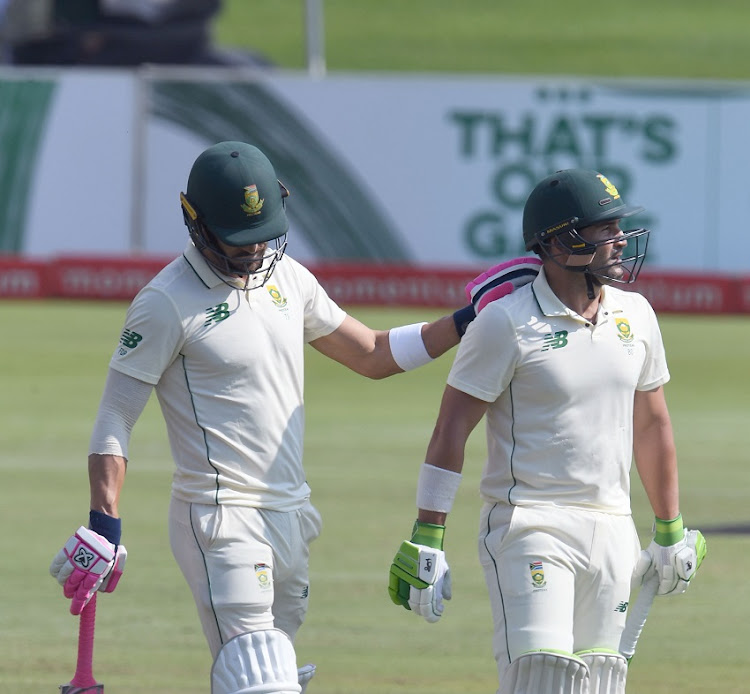 Faf du Plessis pats Dean Elgar of the Proteas on the back after he made 95 runs during day 2 of the 1st Betway Test (WTC) match between South Africa and Sri Lanka at SuperSport Park on December 27, 2020 in Pretoria, South Africa.
Image: Lee Warren/Gallo Images

Former captain Faf du Plessis and Temba Bavuma steadied South Africa’s innings from possible collapse in the third session of the second day with a solid partnership of 97 off 150 balls at SuperSport Park on Sunday.

They rebuilt the innings following the loss of three top order batsmen in quick succession and in the process put SA in a desirable position of 317/4 and a deficit of 79 runs.

SA resume on Monday with Du Plessis on 55 and Bavuma on 41 and the upper hand in reply of Sri Lanka’s first innings total of 396.

Van der Dussen‚ Elgar and De Kock joined Aiden Markram (68) who was the first wicket to fall for South Africa before lunch.

Sri Lanka captain Dimuth Karunaratne won the toss and elected to bat and they were finally bowled out in the first hour of day two on Sunday with debutant Lutho Sipamla ending on 4/75 and all-rounder Wiaan Mulder on 3/69.

Dinesh Chandimal top scored for Sri Lanka with 85 off 161‚ a knock that included 11 boundaries‚ while other notable contributors were Dhananjaya de Silva with 79 and Dasun Shanaka with 66 in their first innings.

The Proteas started their reply on solid footing where openers Markram and Elgar made light work of the Sri Lankan bowling attack with a brisk partnership of 142 that laid the foundation.

Their partnership was finally broken after lunch when Markram’s thick edge was caught by Dasun Shanaka at gully from the bowling of Vishwa Fernando having scored a promising 68.

The efforts of Markram‚ who registered his seventh half-century‚ and Elgar‚ who notched his 15th‚ produced South Africa’s first 100-run partnership for the first wicket after 43 Test innings.

South Africa’s mini collapse started after tea as they lost Van der Dussen and Elgar within four balls in the 44th over from the bowling of Lahiru Kumara and Shanaka respectively.

Elgar‚ who was caught and bowled by Shanaka‚ will be frustrated with himself as his wicket fell five runs shy of what could have been his 13th Test century.

It didn’t take long for stand-in captain Quinton de Kock to return to the pavilion as he was caught by substitute Lahiru Thirimanne from the bowling of debutant Wanindu Hasaranga‚ who claimed his first Test wicket.

But the good news for South Africa is that former captain Du Plessis and Bavuma are looking good on the crease and they still have Wiaan Mulder‚ Keshav Maharaj ‚ Anrich Nortje‚ Lutho Sipamla and Lungi Ngidi in the bank.