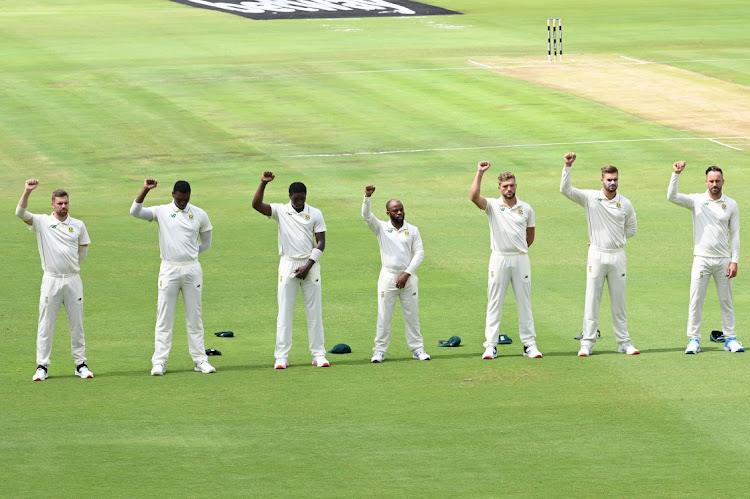 Players after the anthems during day 1 of the 1st Betway Test (WTC) match between South Africa and Sri Lanka at SuperSport Park on December 26, 2020 in Pretoria, South Africa.
Image: Lee Warren/Gallo Images

Cricket South Africa (CSA) has revealed that the Proteas players will raise their fists at the beginning of the Boxing Day Test against Sri Lanka at SuperSport Park in Centurion as part of their support for the Black Lives Matter (BLM) movement.

The Proteas were heavily criticized by the public for their decision not to take the knee during the recent limited overs series against England in Cape Town.

“To this end‚ we have taken the decision – through a process of deep democracy - to raise our fists at the beginning of the Betway Test series against Sri Lanka as a gesture to express our ongoing commitments‚” said a CSA statement on Saturday morning.

“We recognise that gestures have histories and contexts‚ which carry meaning beyond themselves (both positive and negative) and that these gestures may be open to misinterpretation. Symbols also serve the purpose of communicating shared values and meaning.

“We as the Proteas team have‚ on multiple occasions‚ declared our unmistakable support for the Black Lives Matter (BLM) campaign. We have openly discussed the topic on numerous occasions with the media and amongst each other and we are committed to continuing to do this work together.

“We feel it is important to note that while American football quarterback‚ Colin Kaepernick‚ is now known for initiating the gesture of taking the knee‚ he began his protest by sitting during the singing of the United States of America (USA) anthem. His decision to move toward taking the knee was a response to his context and a desire to own a gesture that had deep significance in the USA political environment.”

CSA said they are aware that their decision to raise their fists is likely to draw criticism from certain sectors of the community.

“We continue to own our journey and our previously stated stance on this issue (Players’ Statement and press release dated 25 November). We recognize that our actions will most likely result in criticism from some community‚ one way or another‚ but work to prioritise the team‚ to be honest about our own learning journey and to continue to make decisions that we can own in good conscience as a team‚ first and foremost‚ and as individuals.

“The raised fist is a powerful gesture in our own history‚ as expressed in the iconic images of Nelson and Winnie Mandela on Mandela’s release from prison in 1990. In this context it was a powerful gesture of triumph‚ an acknowledgment of the struggle against apartheid‚ and a commitment to continuing to fight for equality‚ justice and freedom‚ while also honouring the religious and cultural responsibilities of every member of our team.

“The raised fist has a long history also within the Civil Rights movement. It has been used iconically within the sporting arena as well. For example‚  American sprinters Tommie Smith and John Carlos raised their fists during a medal ceremony at the 1968 Mexico City Olympic Games‚ later noting it as a “human rights salute”. More recently it has been used within the BLM movement.