India dismiss Australia inside a day to lead in Adelaide 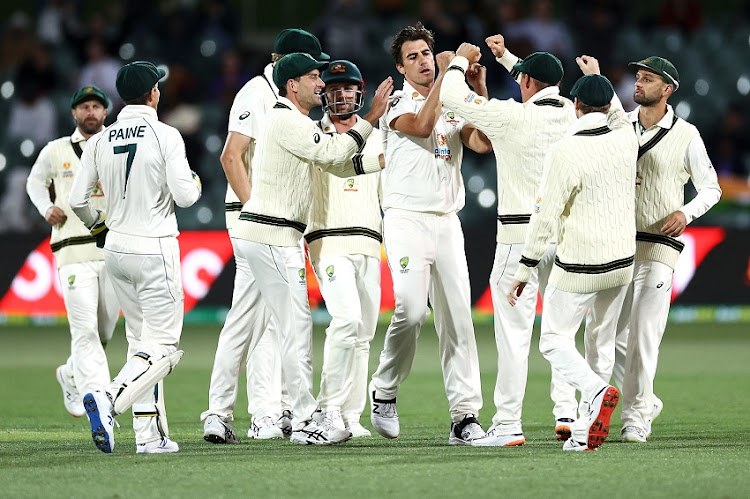 Pat Cummins of Australia celebrates with his team after taking the wicket of Prithvi Shaw of India during day two of the First Test match between Australia and India at Adelaide Oval on December 18, 2020 in Adelaide, Australia.
Image: Ryan Pierse/Getty Images

India dismissed Australia for 191 in 72 overs on Friday to take a 53-run first-innings lead that looked highly unlikely in the first half hour of a dramatic second day of the day-night first test at Adelaide Oval.

Fifteen wickets fell as bowlers ruled supreme on a balmy day at a ground once renowned for big scores, the last coming in the final 25 minutes when Pat Cummins bowled Prithvi Shaw for four to continue the India opener's poor run of form.

Shaw's opening partner Mayank Agarwal and nightwatchman Jasprit Bumrah survived a nervous last couple of overs under the lights to take India's second innings tally to 9-1 and the lead to 62 runs at close of play.

Spinner Ravichandran Ashwin combined with paceman Umesh Yadav and Bumrah earlier did the damage for the tourists, bowling with discipline and taking wickets in bursts to break up potential partnerships.

While Tim Paine played a captain's innings of 73 not out to limit the damage, India will be disappointed with a string of dropped catches.

Australia had started the day by skittling the last four Indian batsmen at a cost of 11 runs in less than half an hour to dismiss the tourists for 244.

Bumrah removed Australia openers Joe Burns and Matthew Wade for eight runs apiece in quick succession before tea, however, and Ashwin (4-55) drove home the advantage after the break.

Off-spinner Ashwin has struggled on his previous Australian trips but he struck a mighty blow when he enticed Steve Smith into an edge to give Ajinkya Rahane an easy catch at first slip.

With one run from 29 deliveries, it was Smith's lowest score since he got a duck in the first test against South Africa in November 2016.

India would have been in an even stronger position had Bumrah and Shaw followed their captain's lead, but they spilled easy catches that would have sent Marnus Labuschagne on his way early in his innings.

Yadav (3-40) finally trapped Labuschagne lbw for 47 after the second break and when he had Pat Cummins caught at gully three balls later, Australia were in big trouble at 111-7.

Paine's resolute 73 off 99 deliveries, combined with some more poor catching from the Indian fielders, kept the home side in touch heading into day three, however.

The four-match series continues after Adelaide with tests in Melbourne, Sydney and Brisbane.