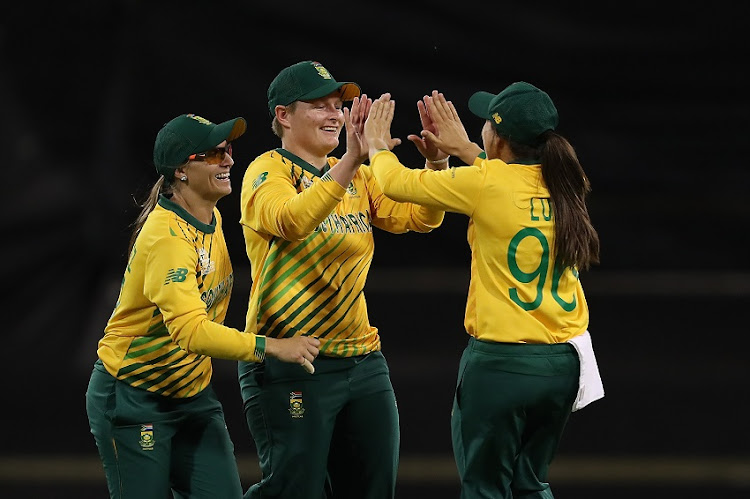 Lizelle Lee and Sune Luus of South Africa celebrate the wicket of Danielle Wyatt of England during the ICC Women's T20 Cricket World Cup match between England and South Africa at the WACA on February 23, 2020 in Perth, Australia.
Image: Paul Kane/Getty Images

The Momentum Proteas‚ the senior women’s national cricket team‚ will return back to the international stage as a team when they host their Pakistan counterparts early next year.

The team last played at the semi-finals of the Twenty20 World Cup in Australia in March where they agonisingly lost to the host nation and eventual winners.

Cricket South Africa (CSA) on Monday confirmed that Pakistan have agreed to a month-long tour for three ODI’s and three Twenty20 internationals to be played in KwaZulu-Natal in January and February.

In yet another boost for women’s cricket‚ the ODI series will be broadcast live by official broadcaster SuperSport.

CSA said the series will be held under a bio-safe controlled environment and it has already secured approval and permission from the government.

The tour will begin with a warm-up match at Chartsworth Oval on January 16 against the South African Emerging squad before the ODI series commences at the nearby Kingsmead Stadium.

The ODI series opener is scheduled for January 20 while the second and final matches will be on January 23 and 26 at Kingsmead and Pietermaritzburg Oval respectively.

The action will then move to umGungundlovu for the Twenty20 extravaganza.

The first Twenty20 will be played on January 29 followed by another one two days later with the last fixture scheduled for Kingsmead on February 3.

The South African women’s tour of England was cancelled in August due to international travel regulations put in place at the time in the wake of the coronavirus pandemic.

CSA director of cricket Graeme Smith said that he is confident the team’s home series against Pakistan will be a success.

“We are thrilled as Cricket South Africa to be making this announcement that our Momentum Proteas are heading back to playing competitive cricket again‚ given the uncertainty and difficulties over the past six months‚” said Smith.

“Hosting this tour of Pakistan Women is incredibly important to us as this will give our Protea Women much-needed game time and also bring in revenue that funds the entire game of cricket‚ especially during these difficult times.

“We enjoy a very good working relationship with the Pakistan Cricket board and we look forward to hosting their ladies side in what promises to be an exciting tour in the new year‚” said Smith.