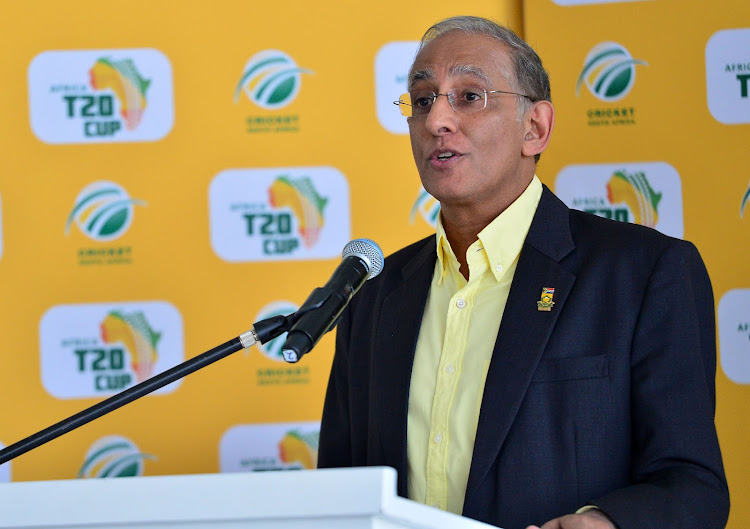 It is also alleged that the multi-million contracts were awarded to those companies without following tender processes.

A London-based company which was appointed to run the league‚ Ortus‚ walked away with the lion’s share‚ R21m‚ despite no evidence of work done on the T20GL project.

The inaugural T20GL was to run from November 3 to December 16 in 2017 but‚ following a deviation from governance protocols that plunged project management of the tournament into disarray‚ was aborted three weeks before the scheduled start.

Former CEO Haroon Lorgat‚ who is part of the incumbent CSA nine-member interim board‚ is responsible for the failure of the T20GL and should have been subjected to disciplinary proceedings for “misconduct” and “poor performance”.

These revelations are contained in a CSA Internal Audit (IA) conducted on the T20GL governance processes during the establishment of the league and the contents of this document have not been aired in the public until now.

VWV Group were contracted to do player draft management for the T20GL and pocketed R6.605m‚ Radiant scored R6.825m for graphics and logo design works and PR agency Fleishman walked away with R4.832m.

Lagardere‚ an international company initially appointed to run the T20GL before they were replaced by Ortus‚ received R3.958m with Canvas Events taking home R2.725m with R2.892m going to Sport Interactive.

These companies are among the top service providers who were awarded projects worth R2m and above without following tender processes.

Payment [R3.958m ] made to Lagardere for the league development strategy was considered by the CSA internal audit to be “wasteful‚” the CSA IA revealed.

Lagardere was initially appointed as the tournament agency but‚ upon separation with Lagardere‚ Ortus was roped in and paid for same key deliverables for phase one‚ which was to develop the league strategy.

According to CSA policy on procurement‚ expenditure of above R1m must go to through tender processes.

The CSA delegation of authority policy also requires that any expenditure of over R5m must go through the finance committee. The establishment of a company to run the T20GL and the project overall was spearheaded by Lorgat as CEO.

The IA probe also extended to reviewing operational processes for procurement‚ recruitment and project management within a company which was registered for the sole mandate to run the T20GL.

“CSA management failed to follow governance processes on appointing Ortus [a company which received R21m]‚” according to the findings of the CSA internal audit report of November 2017.

“Ortus was not part of the due diligence bidding process that was overseen by auditors Ernest and Young from the initial phase of the project.”

The IA report also uncovered that processes were contravened in the appointment of Ernest and Young.

“There was no tender process in the appointment of Ernest and Young to provide advisory and forensic services.”

A project team was appointed by the then CSA board where Lorgat had a joint responsibility with Ortus to head the T20GL project.

A project plan was not prepared by Ortus to deliver a successful league and payments were made to the company without evidence of satisfactory of delivery of services‚ according to the CSA IA report.

The T20GL finance manager at the time Xolile Ndumndum told the CSA internal auditors that he found a lot of secrecy around the handling of finances when he joined in July 2017.

“The League’s initial budget was prepared by Ortus‚ with a lot of secrecy surrounding the numbers‚” Ndumndum said at the time.

Ndumndum told the CSA internal auditors that soon after joining he became worried about the lack of monitoring on the work done by Ortus.

“To try and instill control of the League’s procurement space‚ I always insisted that Ortus employees always had a CSA employee working on transactions.

Approval from the T20GL board or the finance committee on expenditure incurred by Ortus was not obtained‚ according to the report. Budgets were also not prepared‚ which meant expenditure to deliver the T20GL project could not be tracked.

The report found that accountability to steer project delivery remains with the management to which Lorgat was given the mandate to act on behalf of CSA to guide project delivery.

The CSA IA indicated that the governance shortcomings and internal controls within the organisation were dysfunctional from as way back as the time when Lorgat was CEO.

It was also revealed that the T20GL project team excluded the Chief Financial Officer (CFO) and the Human Resources department.

“Human resources followed for the T20GL appointments were not fair and transparent as CSA recruitment processes were not followed on certain key appointments‚” the CSA IA report found.

The report also found that the process for the recruitment and appointment of Russell Adams as T20GL tournament director and Lynn Naude as chief executive support to the CEO’s office was not coordinated through the Human Resources department.

An expense claim of R157‚000 for the month of July 2017 was paid to Naude without a valid receipt or invoice supporting R150‚000 of the expense claimed‚ according to the report.

“There was no contract or written agreement in place confirming Naude’s employment terms.”

The R157‚000 claim was submitted by Ndumndum and authorised by Lorgat‚ the report revealed.

The CSA internal auditors said discussions with Ndumndum indicated that he was requested to submit Naude’s claim by Lorgat‚ who indicated that Naude had been working on the T20GL project for two months of June and July without pay‚ and that her employment status will soon be finalised.

Ndumndum said although there was no contract in place‚ Naude was entitled to the money as she did work for the T20GL.

“While there was no contract written for Lynn [Naude] due to a lack of proper recruitment process‚ the fact was that she had done work on the League project since at least May 2017.

“In making the payment in July and August 2017‚ I accepted the representation and instruction given by Haroon Lorgat‚ who as CEO‚ had the executive powers to appoint staff at the time‚ and determine how much staff should be paid i.e R75‚000 per month in Lynn’s [Naude] case.

“I was not part of Lynn’s September 2017 payment‚ which had to be made as her employment status was unclear at that time‚” said Ndumndum.

Lorgat parted ways with CSA in September 2017 with the IA investigation ongoing.

The IA submitted its report in November 2017 and upon receipt of the IA report CSA sought legal advice.

In preparing its legal opinion‚ the law firm was provided with a copy of the CSA IA and relevant correspondences to and from the affected personnel.

Both the CSA IA and legal opinion‚ which TimesLIVE has seen‚ concluded that Lorgat failed in his fiduciary duties to enforce discipline and to ensure that performance standards were met.

One of the findings of the IA report was that procurement of goods and services and recruitment of employees for the Stellenbosch Kings franchise‚ which was to play in the inaugural T20GL‚ was in contravention of the CSA procurement and recruitment policy.

The law firm concluded in its legal opinion to CSA that‚ under the circumstances‚ Lorgat should be hauled over the coals and be subjected to a disciplinary hearing.

“CSA should strongly consider taking action against the CEO [Haroon Lorgat] for misconduct and or poor performance identified in the IA report‚” the law firm told CSA in its letter dated December 15 2017.

Lorgat did not respond to emailed questions.