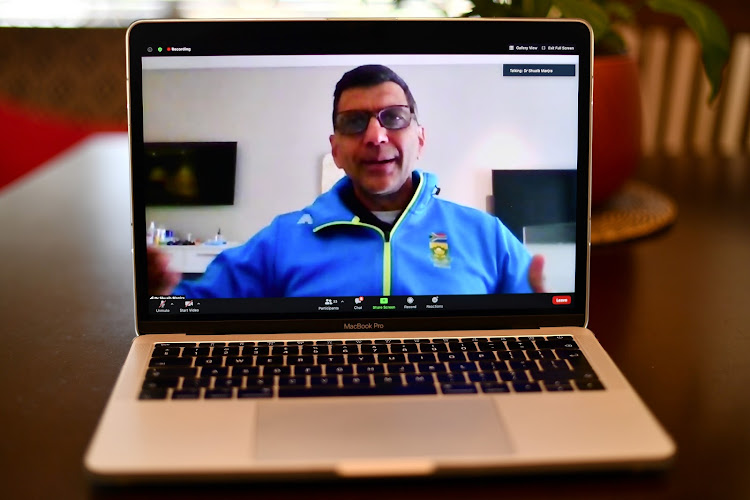 Dr. Shuaib Manjra, the Proteas chief medical officer, briefs the media from Cape Town on November 26 2020 on the team's Covid-19 situations and other related issues within the camp.
Image: Ashley Vlotman/Gallo Image

Cricket South Africa’s (CSA) chief medical officer Dr Shuaib Manjra laid bare the mental struggles the players are facing in the bio-bubble ahead of Friday’s first T20 between the Proteas and England at Newlands.

There’s already one confirmed injury in all-rounder Dwaine Pretorius‚ whose hamstring impediment is serious enough to have him ruled out of the entire limited over series.

He won’t be replaced as there is enough cover in the 24-man squad. South Africa A coach Malibongwe Maketa has also joined the squad after clearing his tests.

Manjra though said the balancing of the players' mental well-being has been tricky‚ especially after they went through four rounds of Covid-19 testing. The third round of testing didn’t produce positive tests.

“The player is being isolated in a hotel in town‚ all alone‚ not being in the bubble and not participating in training. If you’ve been in a hotel room for 10 days‚ you just can’t pull into the park. There’s another seven days before you return to match fitness for match consideration‚ so you can understand the mental strain. The first player was asymptomatic while the second player had mild symptoms‚ but just being locked down takes a toll on you. ”

Manjra said they are also anxiously waiting for their latest Covid-19 tests‚ with the test not being popular with the players. Manjra though said the players understand the necessity of the tests‚ despite the uncomfortable nature of it.

“The players don’t like the Covid-19 test. The players complain so we have to try to get somebody else while some players get overenthusiastic. It’s quite an uncomfortable test‚ but both the teams have been tested. Hopefully we get the results quickly because it could be a stressful 24 hours for us‚” Manjra said.

The worst case scenario of a full squad testing positive hasn’t escape Manjra‚ but the medical specialist hoped it wouldn’t materialise ahead of Friday.

Manjra said they’ll have to deal with the ugly spectre of mass positive tests should they arise‚ but England are also in the same boat.

“If you’ve got a lot of positives‚ you’re going to have to quarantine contacts and we can’t bring in a player from the outside without bridging them. That means testing them twice before they come in. We have to test them the first time‚ put them into quarantine and do so for the second time before coming into this space‚” Manjra said.

“If a large group of people test positive‚ we wouldn’t have an adequate opportunity to bridge people into the bio-bubble. That’s the worst case scenario that we won’t contemplate‚ but if it happens‚ we’ll have to deal with it as it arises and determine what we’re going to do about it. With a squad of 24 players‚ hopefully we can put a team together. England also face the same risk.”