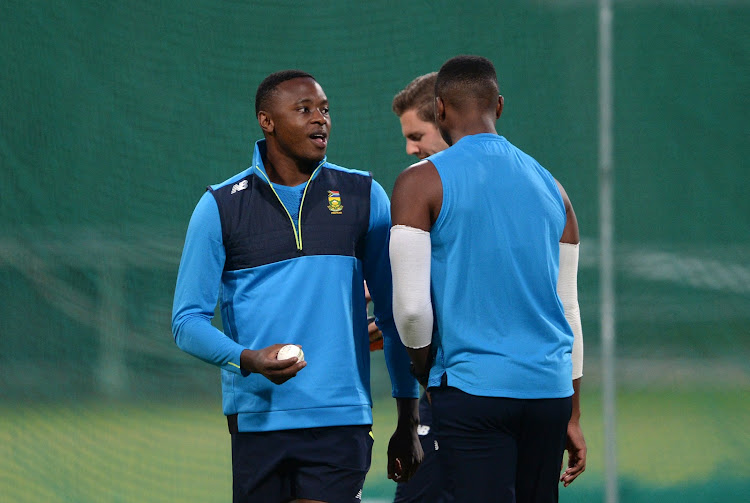 Kagiso Rabada was magnificent during the Indian Premier League with 30 wickets in 17 matches but the Proteas speedster says that will count for nothing when he steams in against England.
Image: Ryan Wilkisky/BackpagePix

Positive Covid-19 cases within the Proteas camp have not disrupted the national team’s preparations for the six-match limited-overs contest against England‚ premier strike fast bowler Kagiso Rabada has said.

Eoin Morgan’s England team were put on high alert after Cricket South Africa (CSA) revealed that a Proteas player tested positive for Covid-19 during tests conducted before the squad entered the bio-secure bubble environment in Cape Town on November 18.

The situation escalated after a second member within the Proteas 24-man squad tested positive for Covid-19 at the weekend during a second mandatory round of testing‚ leading to a cancellation of an intra-squad practice match that was scheduled for Boland Park in Paarl on Saturday.

CSA said the unnamed player‚ who is understood to have come into contact with other teammates‚ was isolated from the rest of the squad and moved to a separate accommodation.

The Proteas are sharing the Vineyard hotel in Cape Town with the tourists but in separate bubbles.

The limited-overs series begins at Newlands Stadium in Cape Town on Friday but the opening match could yet be jeopardised if Covid-19 tests produce more positive results.

Both teams will undergo another round of mandatory testing on Thursday while the Proteas positive cases and those in self-isolation will be tested two days earlier on Wednesday.

Rabada said though the situation in camp has been weird due to positive Covid-19 cases and strict safety protocols‚ the Proteas have found ways to train and prepare without glitches and with minimal risks.

“It’s been quite bizarre actually‚” said the 25-year-old Rabada while interacting with the media virtually from Cape Town.

“We have to train in groups now. There’s a group of non-contacts and a group of close-contacts.

"It doesn’t mean that anyone is positive. But it just means that you have to take that extra precaution‚ so that is how it has been.

“We are just waiting [for results from another mandatory round of testing]. There’s going to be a test some time soon and we will wait for those results to come back.

“But training is going well [and we are] sticking to the strict rules that have been set in place at the moment.

"It is definitely challenging but we are training well and communicating well as a group.”

Rabada last played international cricket in February but he proved his fitness with the Delhi Capitals in the Indian Premier League where he ended as the leading wicket-taker with 30 scalps for the runners-up.

His 30 wickets at the tournament included the dismissals of some of the England batters who will face off against the Proteas from November 27 to December 9.

Does that make Rabada think he will have the advantage when he steams in to lead the attack in the first match?

“Not particularly‚ no‚ because we have played against them quite a bit already and like I said‚ in cricket you just have to repeat and repeat your performances.

“It is almost like your performances of the past are all gone now. They are all gone and you have to play a new game.

“It is a new game and you have to try your best or produce a match winning performance.

Some of the world cricket fast bowling stars will be on show during this six-match contest with Rabada and Anrich Nortje expected to outshine Jofra Archer and Mark Wood on home conditions.

“I mean‚ in a team performance that is what you would want‚ to match yourselves against other team’s departments.

“But ultimately we are just focussing on ourselves to see if we can do a better job. It is not about us looking too much into how their bowlers bowl and us bettering that.”

The Lions star‚ however‚ said he is more focussed on removing batsmen from the crease than on what the pacemen in the opponents camp will be doing‚ though he expressed holding Archer and Wood in high regard as fast bowlers.

“It is our batter’s job to worry too much about what their bowlers are doing‚ and we need to worry about their batters.

“They are world class fast bowlers and you have to appreciate the skill that they bring. They have proven it. Jofra has proven and Mark Wood has proven.