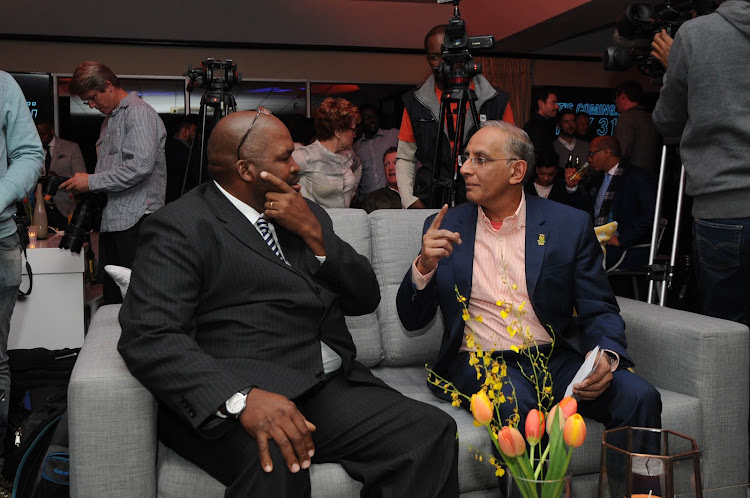 A file photo of Cricket South Africa board chairperson Chris Nenzani and former CEO Haroon Lorgat in a discussion during the T20 launch at the Wanderers Stadium in Johannesburg on May 31 2017.
Image: Sydney Mahlangu /BackpagePix

Former Cricket South Africa (CSA) CEO Haroon Lorgat “could not believe” his ears when it was announced three years ago that the T20 Global League had collapsed.

Lorgat was disappointed when the ambitious league intended to rival the lucrative Indian Premier League was terminated and he told TimesLIVE that an independent forensic investigation is necessary to uncover what led to the event being abandoned in September 2017.

"​I could not believe what I was hearing when I received the news that the T20 Global League was postponed or cancelled.

"It was such a good thing for cricket in SA and it left me with a feeling of real disappointment,” Lorgat said.

Lorgat “amicably” parted ways with CSA after a breakdown of trust between him and the board over how he allegedly ran the organisation of the T20 League without the oversight of the board.

He dismissed allegations in the media that accompanied his departure claiming he had undermined the board. He believes “behind the scenes moves” to remove him from his position were in play.

There was also talk that he had withheld critical financial information from the board related to the T20 Global League.

But a media release three months after his departure in December 2017 quoted CSA board chairperson and president Chris Nenzani as saying “a complete reconciliation of the total expenditure incurred on the T20GL has been concluded and we can now confirm that all monies have been adequately accounted for and that we have found no irregularities or financial mismanagement".

It is public knowledge that the T20 Global League was expected to bring in $32m from licensing fees acquired from the eight franchises. Lorgat said the idea was that the $32m guaranteed payment would fund domestic cricket every year.

The ambitious league was aborted two weeks after Lorgat had left the organisation.

A lack of a broadcast partner at the time was put forward as the reason.  TimesLIVE has since seen a broadcast rights proposal from SuperSport.

The right to own one of the eight franchises for the T20 Global League was accompanied by a requirement for each team owner to pay CSA $3,5m for a tier 2 team and $5m for a tier 1 team as license fees. The team owners had already put down deposits of $250,000 each.

This money from licence fees would have amounted to $32m going into the CSA coffers annually, Lorgat said.

He denied accusations of financial misinformation.

He said he kept the T20 Global League Company board, a 100% owned subsidiary of CSA to run the operations of the league, informed at every corner.

“There’s documentary evidence to that effect. In fact Mr Moroe, (chairman of the GLT20 board) Mr Nenzani, Mr von Zeuner and Mr Khan all served on a sub-committee into which I reported regularly.

“As for the T20 Global League, I would be pleased to see an independent inquiry,” said Lorgat.

Media pronouncements made by the Hong Kong-based owners of the Bloemfontein franchise said they had alone committed a $100m  investment into South African cricket.

Approached for comment, CSA told TimesLIVE in a statement to direct questions at Lorgat.

“It is up to Mr. Lorgat whether he wishes to respond to the allegations/questions you have put that concern or affect him.”

Cricket SA have been dealt another legal blow after their suspended chief operating officer Naasei Appiah won his appeal against the organisation.
Sport
1 year ago

Suspended Cricket South Africa (CEO) Thabang Moroe has been formally charged by the board with eight counts of misconduct‚ his legal representatives ...
Sport
1 year ago

With Saturday’s 3Team Cricket tournament showing that cricket is indeed possible during Covid-19‚ the national women’s team have taken it a step ...
Sport
1 year ago
Next Article