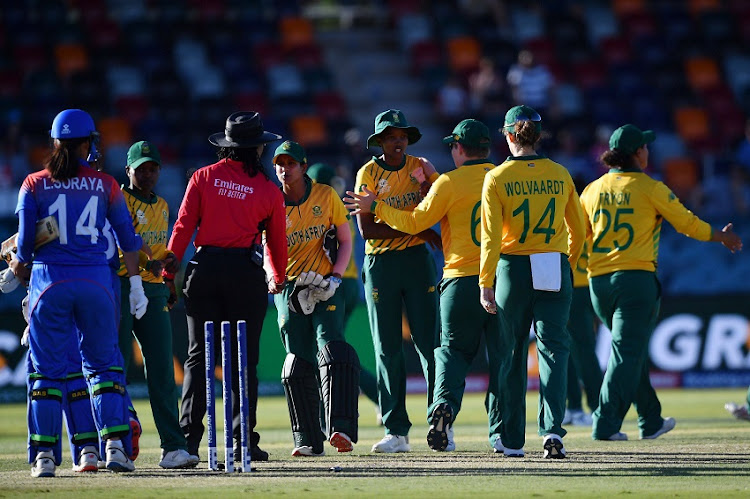 South Africa's players celebrate after a victory against Thailand during the Twenty20 women's World Cup cricket match between South Africa and Thailand in Canberra on February 28, 2020.
Image: Saeed KHAN / AFP

With Saturday’s 3Team Cricket tournament showing that cricket is indeed possible during Covid-19‚ the national women’s team have taken it a step further with a return to training on Monday.

The camp will form part of preparations for a proposed tour to England in September.

A 24-women squad will assemble at the High Performance Centre in Pretoria for week-long‚ skills based training camp that will also include pre-season medical assessments.

The players will then return to their respective provincial bases for individual training from August 3-14. After that‚ they will return for a two-week camp from August 16-27.

This will be the first time the women’s group will be together‚ especially after their successful T20 World Cup sojourn. They were supposed to have hosted champions Australia and travelled to the West Indies for limited overs engagements.

The spread of coronavirus curtailed that and all forms of cricket around world until earlier this month where the West Indies and England have engaged in a three-Test series in bio-secure environments.

In a statement‚ Cricket SA said during the camps the squad will train and live on-site at the HPC in a bio-secure environment. The venue will adhere to strict safety protocols in accordance with guidelines set out by CSA’s Covid-19 steering committee and approved by the National Institute of Communicable Diseases (NICD).

Players and coaches will observe social distancing measures throughout in line with government regulations.

CSA’s director of cricket Graeme Smith‚ while happy with how cricket has moved well with the adherence to strict safety regulations‚ said the camp is important for the women’s team return to playing.

“We have been through a frustrating period with our Proteas not able to build on the excellent form they showed at the ICC Women’s T20 World Cup and next week’s camp represents an important new starting point‚” Smith said.

“The projected tour of England will have a heavy emphasis on the 50-over format as we start preparing for the ICC Women’s World Cup which is still scheduled to be played in New Zealand early next year.”