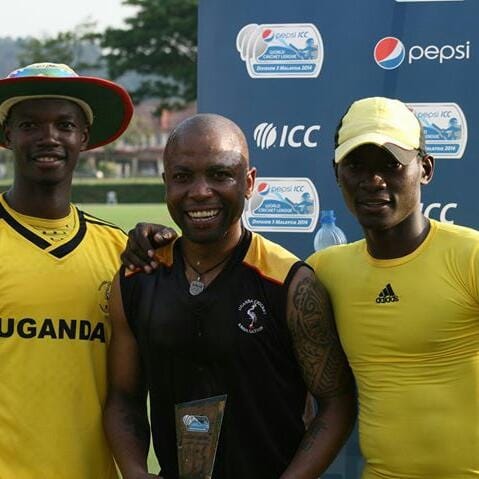 Former South Africa Under-17 and University Sports South Africa (USSA) cricketer Mpho Selowa has described how lack of opportunities forced him to take up Ugandan nationality to realise his childhood dream of playing international cricket.

The promising left-handed batsman and wicketkeeper‚ who came through the development structures at Northerns Cricket Union (NCU)‚ said the discriminatory system left him frustrated.

Selowa was discovered in Atteridgeville and received a scholarship to St Alban’s College‚ and went on to play franchise cricket for the Titans‚ Dolphins‚ North West and South Western Districts (SWD).

“I was disgruntled and bitter at that time with South African cricket because of racism and discrimination that denied many black players equal opportunities. I got a call from Johan Rudolph who coached me as a junior at NCU and he was the coach of Uganda‚ because he believed that I can do well for them‚” said the 33-year old who is back in the country.

“I had a discussion with my parents and they gave me their blessings because they knew that I was tired of SA cricket and off I went to Uganda. I don’t regret taking that opportunity because it opened my eyes to a lot of things‚ and I had to leave SA because of what was happening to black players.

A group of black rugby coaches and former players‚ including those with a Springbok affiliation‚ have thrown their weight behind the Black Lives ...
Sport
2 years ago

“Time has helped me to heal from the disappointments and I am not bitter anymore – I just want to tell my story.

“The system spat me out. Most of the time when you question things‚ they take you out with the excuse that you are ill-disciplined and have poor attitude.

“If your club or school is not winning matches they blame black players and if we win the white guys are doing well.

“How it is that Northerns invested so much in some of us but they let us go‚ and be happy to sign white players who are earning a lot of money‚” said Selowa‚ who played with the likes of Neil Wagner‚ Faf du Plessis‚ Heino Kuhn‚ Aaron Phangiso and Stephan Myburgh who went on to play international cricket.

To qualify to play for Uganda’s Cricket Cranes‚ Selowa had to stay and play cricket in the country for a year in 2013.

“I stayed in Uganda for a year to get my citizenship so that I can realise my dream of playing international cricket and if that is not passion or commitment to the game‚ then I don’t know what it is.

“Some white players‚ mostly less talented‚ get international cricket on a silver platter. The system discovered me from the age of nine‚ they took me to a private school but they make you feel that they are doing you a favour.

“My experiences in Uganda were very good because I played in three World Cup qualifiers. It’s unfortunate that I had to go to another country to realise my dream of playing international cricket.

“Unfortunately‚ Uganda never qualified for the World Cup but I got to travel the world a little bit and I have dual citizenship. When I started playing cricket‚ I never thought that I will travel this long and painful road to achieve my dream.”

Selowa said he had seen the recent statement from NCU saying that incidents of racism where never reported‚ but he says some of the senior administrators and board members knew the plight of black players.

“I saw racism in cricket first-hand and I experienced it from high school. Most of the black administrators were like our parents when growing up – we used to tell them about these things.

“I saw the statement from NCU where they said there was never a formal report of racism but there are many administrators and board members there who we told about what was happening.

“How can you have so many talented black cricketers in the system and end up with Aaron Phangiso as the only one who made it to the Proteas?

“I remember while I was at North West‚ I used to earn R2‚000 a month and as the season went on I found out that I was actually supposed to taking home R15‚000.

“Someone told me that my money was split between three to four white players to increase the salaries.

“I also remember one incident when I went out with a group of white players and the coach‚ and they were complaining about quotas saying most of the black people weaken the team.”